For the start of our Day 4 ride, we checked the Motorcycleroads.Com web site and decided that we would follow a suggested loop called the Quabbin Loop.  Our 70 mile route started in Hadley, MA and ended in Belchertown, MA. 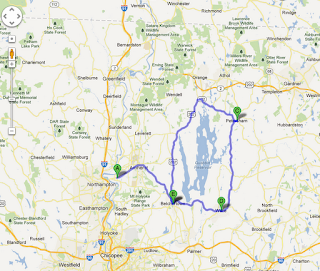 The ride started North on Route 202 and like other roads that we traveled earlier in the week, it did not disappoint.  Traffic was almost non-existent and the ride changed in elevation on several occasions.  Both Luc and I gained a real appreciation for the quality of this road! 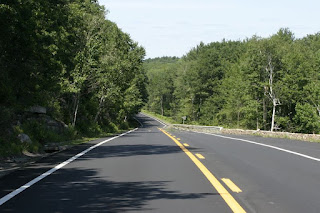 There was a quick stop at the junction of Route 202 and Route 122 to check our map and to confirm that we were headed in the right direction.  The ride South on Route 32A was beautiful as well...a nice scenic ride through rural Massachusetts!  Luc and I really enjoyed the ride through mature forest regions of the area! 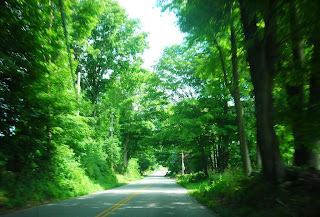 We opted not to stop by the Quabbin Reservoir as we wanted to leave enough time to tour Northern Connecticut.  Also, we were on a loosely defined schedule as we had plans to visit with Luc's sister in Scotland, CT later in the day!  After completing the loop, we stopped in Belchertown, MA for a coffee and to take a look at the next leg of our ride to Granby, Connecticut.  While at the coffee shop, we struck up a great conversation with an older gentlemen who suggested a route to Granby for us. After a quick break, we were headed for Connecticut.