Last September, I was glued to Twitter following Team Hellcat Customs and their attempt to set a new Land Speed Record at Bonneville on a turbo powered Harley Davidson Sportster with a sidecar!  I was thrilled when I heard that Jase and his team set a new world record! 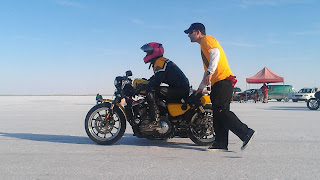 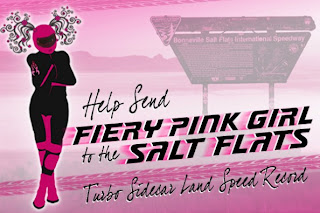 For further information for how you can support Kelly and Team Hellcat Customs, visit "Send Fiery Pink Girl to the Salt Flats." I know that I will be supporting!  Wishing Kel, Jase and Team Hellcat Customs all the best as they work towards achieving their Land Speed Record goals! Go team go!
Posted by Faceyman at Sunday, April 28, 2013 No comments: