As mentioned in a previous blog post, two people I really enjoy following on Twitter are Kel, AKA @FieryPinkGirl and her partner Jase, AKA @hellcatcustoms.  Jase builds custom motorcycles, Hellcat Customs in Arizona and has shared his motorcycle expertise with me on several occasions

In September, Jase will be traveling to the Bonneville Salt Flats to attempt to set a Land Speed Record on a turbo powered Sportster with a sidecar attached...sounds cool, eh?  Jase is currently seeking funding to assist in setting this record.  His team is almost half way to their funding goal of $5000.00 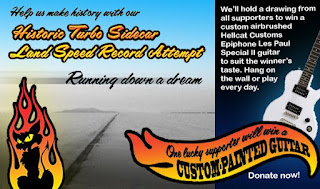 Last week I offered my support to Jase and his team!  Check out the poster above and visit Jase's
Turbo Sidecar Land Speed Record Attempt Funding page!  Everyone who offers support, will have an opportunity to win a Custom Painted Les Paul II Guitar...the chance to win the Les Paul II is a cool fact itself!

So, here's your chance to say that you supported a "Land Speed Record" attempt and to win a Custom Painted Les Paul II Guitar!  Wishing Kel, Jase and the Hellcat Team luck in achieving their goal!
Posted by Faceyman at Saturday, June 02, 2012 No comments: