March 30th, 2013 and I got out for my first ride on the new Harley Davidson Street Glide!  I usually wait until the end of April each year due to the road conditions...potholes, frost heaves, loose gravel, etc. Yesterday was a nice sunny day with a temperature of 9C (48F) and the anticipation of riding my new motorcycle was just too great to pass on!  I dug out my leathers/warm riding gear and I was off!

I adjusted the mirrors, completed a quick safety check, tuned in the stereo and fired her up! 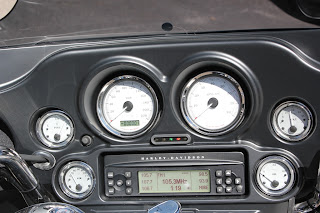 I pulled out of the yard and I have to tell you that I had a big grin on my face, a grin that lasted awhile!  Overall, my goal for the first ride was to get used to the Street Glide.  It's the heaviest bike that I have owned and I wanted to test her out at both low city speeds and faster highway cruising!  The first thing that I have to say is that the ride is very comfortable.  There is very little engine vibration at riding speeds, the only vibration is at idle and that's just a Harley thing.  I took a quick ride through city streets to get a feel for the bike; so far, so good!  The only challenge that I ran into was with the turn signals; the turn signal switches are separate, not combined like every other motorcycle I have owned.  The left turn signal is on the left side of the handle bar and the right turn signal on the right side...this is going to take some getting used too!  I was pleased to find out that the turn signals are self-cancelling, something the dealer did not tell me. 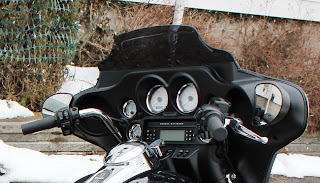 After a quick ride through city streets, I hit the highway for a ride along the beautiful Saint John River.  The Street Glide exceeded my expectations on the highway, comfortable and very easy to handle.  Everything on the bike feels good, from the seat to the riding position, to the acceleration and the braking and the overall handling of the machine!  The "Bat Wing" fairing provides good protection from the wind and cold and the stereo sounds great at highway speeds!  I made a few stops to get some pics! (Click on pics for a full view) 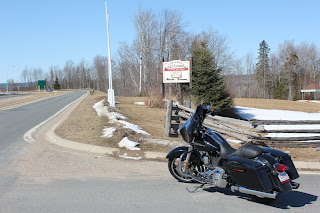 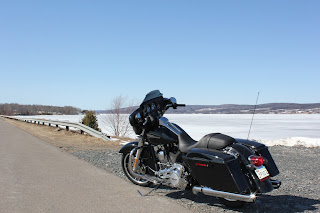 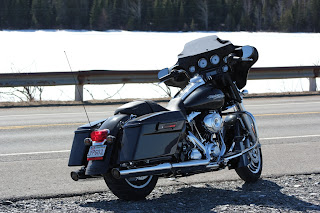 Overall, I have to say that I am thrilled with the new ride!  It was nice to hit the road and feel the open air and even better on a new machine!  Odometer now reads 180Km and I look forward to the rest of the riding season! 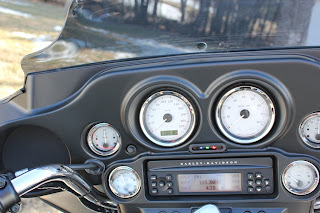 Ride safe and keep your right hand cranked!
Posted by Faceyman at Sunday, March 31, 2013 No comments: 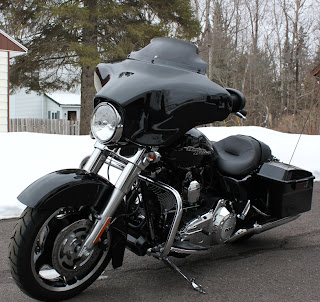 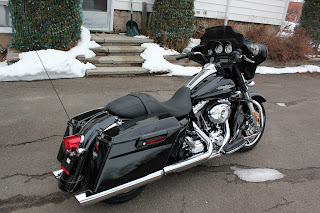 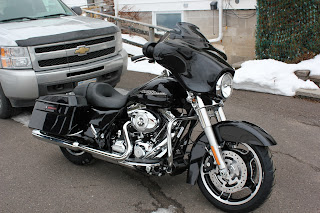 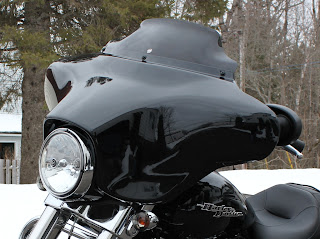 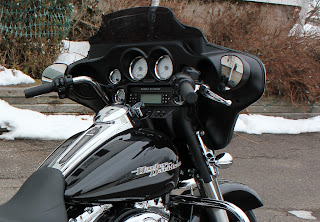 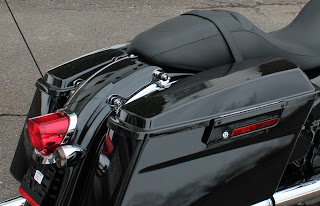 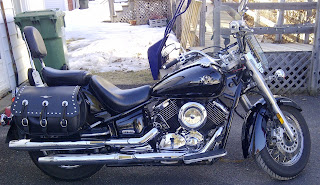 Now I move to the next stage of my riding life and look forward to the 2013 riding season...if only this snow would go!  Until next time, ride safe!
Posted by Faceyman at Sunday, March 24, 2013 No comments:

Famous last words, "I can't believe I did it"!  Just going to let the pictures do the talking for me, will add more in a future blog post! Faceyman's new 2013 "Midnight Pearl" Harley Davidson Street Glide - FLHX 103! (Click on pics for larger view) 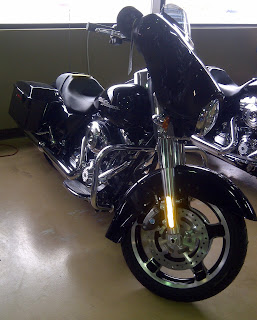 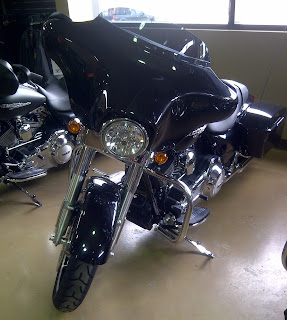 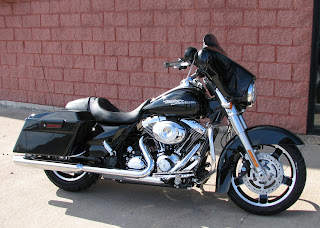 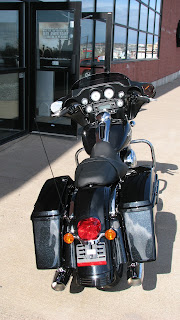 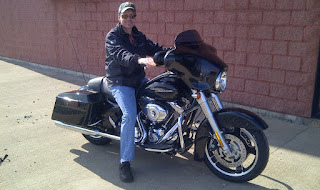 Now I can't wait for riding season to begin!  Life is good!

Yamaha recently introduced the Star Bolt motorcycle.  If I was in the 18-25 demographic, I would be all over this factory style 942cc bobber (I use the term bobber loosely)! 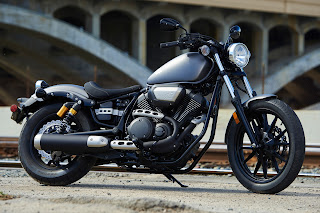 2014 Star Bolt
There is no doubt about the market that Yamaha is targeting, the question is, will Yamaha be able to crack into the ever so popular Harley Davidson Sportster market?  Price point will be a factor for some and the Star Bolt will be in direct competition with HD Iron 883. 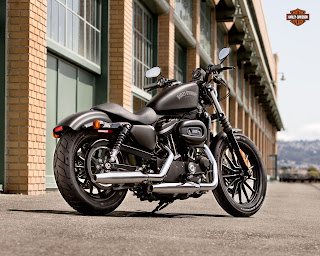 Harley Davidson - Iron 883
Other HD Sportster models such as the Seventy-Two and Forty-Eight are at higher price points than the Star Bolt, a factor that may sway new riders towards the Bolt. A strong point about Yamaha...they build quality products! My 2002 Yamaha Star 1100 Classic has been a bulletproof motorcycle, I trust the Bolt will have the same high standard that Yamaha has set for it's other motorsports products!

It will be interesting to see what happens when the Star Bolt hits the market in July!
Posted by Faceyman at Sunday, March 10, 2013 2 comments:

It has been a long winter or at least I feel that it has been.  Maybe it's my age or maybe it's the fact that I want all of this snow gone and the chance to jump on two wheels and hit the road.  Earlier this week I was spending some time online browsing through various motorcycle websites and I came across this advertisement for a Honda motorcycle. 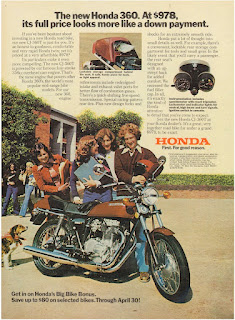 The advertisement instantly brought a smile to my face and took me back in time, at least for a little while.  Picture it, the year is 1978...now I am giving away my age and a young high school kid gets his first street bike, a 1977 Honda CJ360T just like the one in this advertisement!  For a 16 year old, this was one cool motorcycle, a sporty yet very simple motorcycle!  My CJ360T was exactly like the one in the advertisement with the air cooled 356cc inline twin engine, two into one exhaust and red and black paint scheme. 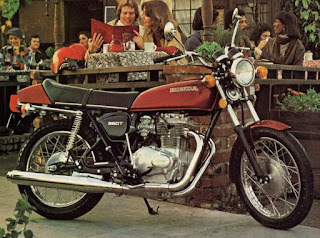 The CJ360T was a simple motorcycle, nothing complex.  It did not have electric start or disc brakes, drum brakes front and back and a kick starter that never let me down.  I can remember riding this machine everywhere, regardless of weather conditions and it always worked like a charm!  I put so many miles on my CJ360T that during my 3rd summer, I had to have a top end job done...cylinders bored, new pistons and rings. 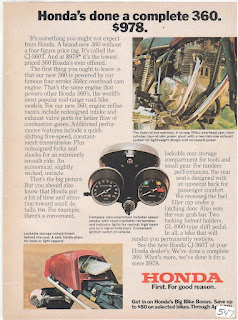 The CJ was only produced in 1976-1977 and was a bit of a flop in the marketplace...it was not nearly as successful as it's cousin the Honda CB360T, but back in 1978, that did not matter to me!  I had a street bike and I could go anywhere that I wanted.  I enjoyed reflecting back to a time when life was simple and I didn't have a worry in the the world, an experience I am sure that many bikers can relate too!

Leave a comment and let me know what your first street ride is/was?
Posted by Faceyman at Saturday, March 02, 2013 No comments: