Sailing the Miramichi River is a term we use to describe canoeing or kayaking on the Miramichi River. Saturday was a perfect day for a sail and my wife and I had previously made plans to go to a friend's camp (Glen & Sandra's), meet up with a group and sail the river. It was an absolutely perfect day to be on the water. Our friend's camp is about an hour's drive from our place. We arrived around noon, had lunch and enjoyed the view from our friend's camp. 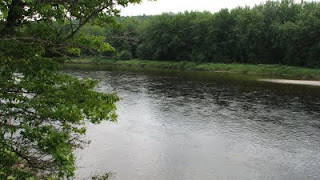 After lunch, we loaded the boats and proceeded to the river! 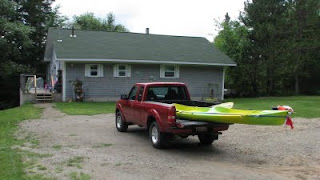 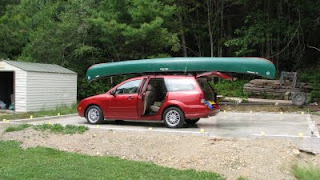 We drove to the far end of Porter Cove, put the boats in the water and started our 3.5 hour sail down the river. 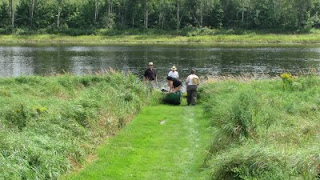 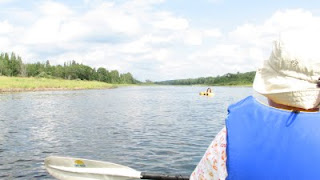 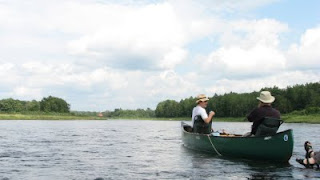 The water was warm and the paddling was very easy as we let the current do most of the work. There were a couple of spots where the water was low and we had to get out of the boats to move them down the river. There are some beautiful camps along the river. 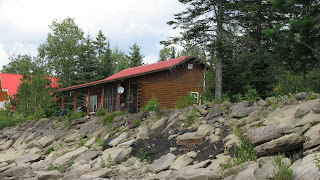 Here we are in the kayak... 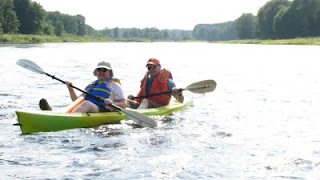 Three and half hours later, we arrived at the McNamee/Priceville Footbridge. This is the third generation of the bridge as it had been destroyed twice over the years. 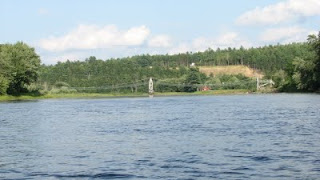 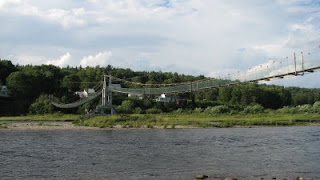 At the bridge we pulled the boats out of the water and figured out that Richard had left his car keys back at the starting point of our river trip...problem, we were 10km from the car keys! It was a minor problem as people around this part of the country are very friendly and accommodating! Glen (owner of the camp) said, we will walk across the bridge and find someone to drive us to the vehicles and retrieve the keys...that is exactly what we did. Here are a few pictures from the bridge. 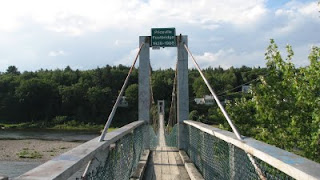 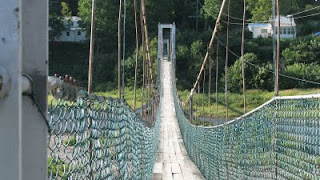 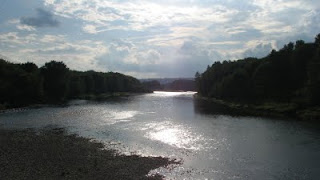 We made our way back to the boats, loaded them and returned to Glen & Sandra's camp for dinner. We enjoyed good company and an excellent feed of salmon, new potatoes, fresh corn and apple pie. What a great way to end the day! About 10:00pm, we gave our thanks, bid farewell and hit the road for home. Another great summer day in New Brunswick!

Until next time, ride and sail safe!
Posted by Faceyman at Sunday, August 23, 2009 5 comments:

Email ThisBlogThis!Share to TwitterShare to FacebookShare to Pinterest
Labels: Miramichi

The Bridges of Sunbury County!

Yesterday, I was out for a short cruise on the VStar 1100 Classic. I ended up just outside the city and was looking for a covered bridge that I had been to once before. I traveled on many different back country roads, but could not for the life of me remember where the bridge was. It was very hot, so I gave up and returned home.

The fact that I could not remember the location of the covered bridge bothered me, so when I got home, I went online and found the location of the bridge. I was very close to it yesterday...within 1km. I also discovered 3 other covered bridges in close proximity to the one I was looking for yesterday. They were all located in Sunbury County, New Brunswick. So, I planned my Sunday ride, get up early in the morning and travel to the four "Covered Bridges of Sunbury County".

My travel route is shown below, with the bridges being located at points B, C, D & E:

My first destination was Rusagonis, about a 35km distance from my house. The weather was perfect and there was virtually no traffic, so I could travel at my own speed. One of the things you have to be cautious of around here when traveling on back roads are critters. Along the way to the first bridge, I came across a few deer in a farmers field. 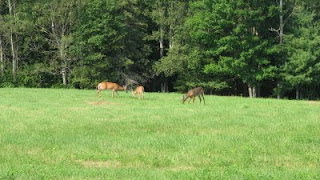 First stop was the Patrick Owens Bridges in Rusagonis. The bridge was built in 1909 and the bridge has 2 spans at 35.2m (115' 6"). The bridge crosses the Rusagonis River. This was the largest of the four bridges that I visited. 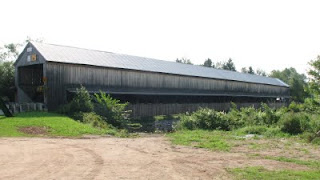 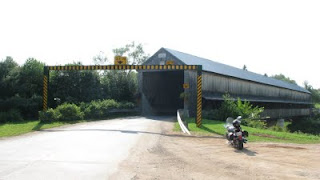 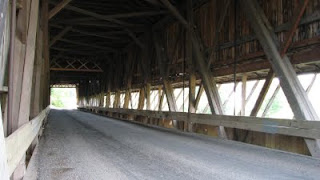 The next bridge, the Smyth Bridge was 30km away and located at Mill Settlement. It was a much smaller covered bridge than the Patrick Owens Bridge. The Smyth Bridge spans a length of 41.5m or 136' 0½". It was built in 1912 and crosses the South Oromocto River. 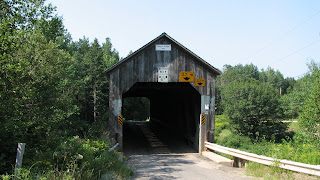 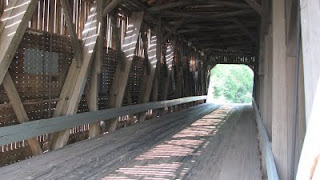 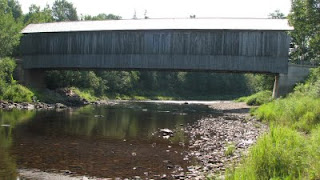 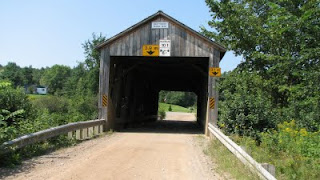 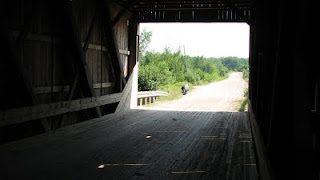 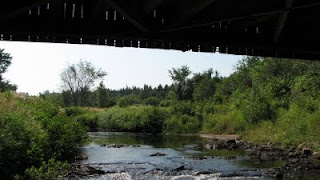 The fourth and final bridge was the Bell Bridge located in Juvenile Settlement, it was approximately 12km from the Hoyt Station Bridge. To get to the bridge, you travel through some beautiful farm country! The roads were a blast to drive! 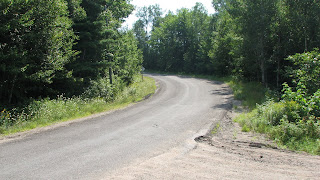 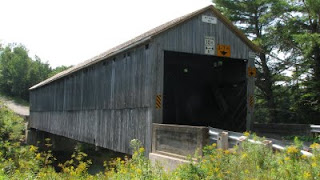 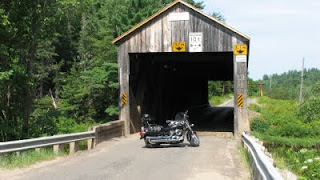 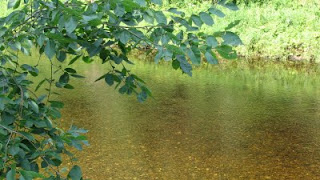 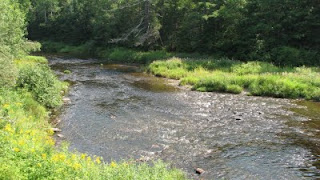 All four bridges are maintained by our provincial government and they really are gems that are hidden within the Province of New Brunswick. I thoroughly enjoyed visiting each of the bridges and was left thinking, what was life like in these settlements where the bridges are located in the 1909-1936 era?

After visiting Bell Bridge, I started the journey home. I saddled up and headed toward route 101 to Welsford and then route 7 back to Fredericton. I was only on the bike a few minutes when I was hit by a small bird, it scared the crap out of me! The bird hit me right in the face, but fortunately for me I was wearing my Shark full face helmet. The shield, which was open at the time and the side of my helmet took most of the hit. The bird ended up on my lap, I brushed it off and stopped to check out my helmet. There was no damage to me or the helmet, just the bird!

Even with the bird incident, it was still a fun ride! Until next time, ride safe and watch out for birds!
Posted by Faceyman at Sunday, August 16, 2009 2 comments: