At the recent 2011 Atlantic Motorcycle Show, there were two sport bikes that I spent some time looking at, the Kawasaki ZX-10R and the BMW S1000RR. The reviews I have read on each are overly positive for these high horsepower machines. Motorcycle.Com recently put the two up against each other...they provide an in-depth comparison of the two bikes and in the end, they give the S1000RR a slight advantage over the ZX-10R. Well worth the read! This video from Motorcycle.Com provides a good overview of both bikes. Enjoy!

Over the last couple of days Motus released a couple of videos. One about their motorcycle company and a second showing a street ride at Daytona. Enjoy...

Spring is coming and I can't wait to ride...
Posted by Faceyman at Thursday, March 10, 2011 No comments:

Today, there were several tweets via Twitter related to the release of the American made Motus MST-01 motorcycle. I have to admit, I had never even heard of Motus Motorcycles, so I was rather interested. The first tweet provided a link to MCN where there is a brief description of the bike. The second tweet provided a link to Hell for Leather where there is additional information and pictures of the Motus MST-01 release. 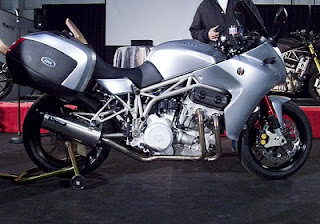 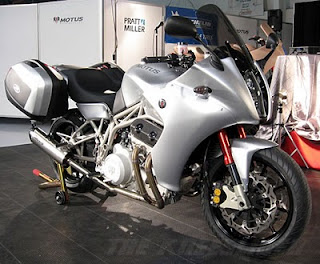 Photo: The KneeSlider
Along with the MST-01 model, there will also be an upgraded MST-R model available. 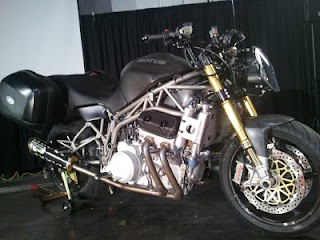 Photo: Motorcyclist Magazine Blog
Although, I have only seen a few images and video clips, the bike appears functional, somewhere between a sports bike and a sports tourer. The exposed frame gives the MST-01 a Ducati like appearance and the 1654cc, Pratt & Miller V-4 direct injection push rod engine looks awesome! Check out the video, the bike certainly sounds unlike others...

Video: Hell for Leather
A quick Google search, led me to this YouTube video which provides additional details on the unique KMV-4 power plant in this machine. This is an engine even car guys are going to appreciate! A second video shows the KMV-4 engine on the dyno.

It is nice to see North American companies moving into the sport bike market...a couple weeks back, Erik Buell Racing with the EBR 1190RS and now Motus Motorcycles.