Last weekend I attended the Atlantic Motorcycle Show in Moncton. I was a bit disappointed as it turned out to be more of a consumer show rather than a true motorcycle show. There were very few custom bikes and the majority of the machines were straight from the factory.

I was hoping to see more custom bikes and some antiques as well. One of the few custom bikes at the show was this custom Harley from Kent County Customs. 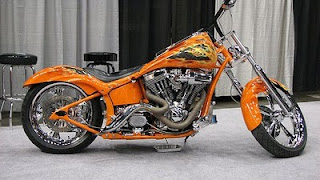 The bike looked great and the paint was very well done. I wish the guy who did the custom work would have been around, I would have liked to talk to him.

One of the real treats and a bike I have seen many times was the "Betty Bobber". The significance of this bike it that it was built by high school students...how cool is that! 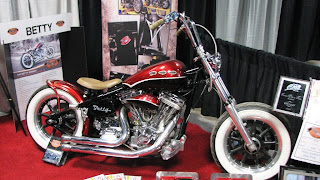 Last year, the "Betty Bobber" won two awards at the Donnie Smith Bike Show...what an accomplishment for a group of high school students and their teacher!

I spent a bit of time visiting the manufacturer's displays and looking at new bikes. I was really interested in seeing the 2010 Victory Vision 8-Ball as I read a review of the bike several weeks back. It really is a monster! 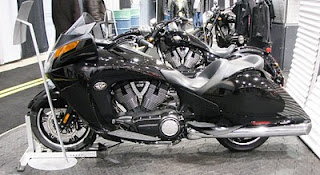 The Harley Davidson display, in my opinion was one of the best at the show. They had more reps there than any of the other manufacturers and were eager to promote their products. The extra effort that Harley-Davidson (Deeley Canada) put into this show did not go unnoticed; it was one of the most popular at the show. This 2010 Night Rod Special caught my eye! I would love to take one of these for a rip down the road! 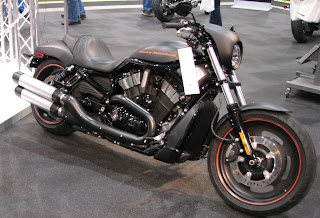 I spent quite a bit of time talking to one of the reps from Harley-Davidson and was asking a lot of questions about Buell and inventory left in Canada. Immediately the rep asked what I was interested in and I said that I like the look of the 1125R, well that's all it took. Within minutes, I had a couple of dealers trying to find me an 1125R...there must be some kind of incentive for them to move them out of show rooms cause they were trying really hard to locate one. They were able to find a 1125R demo at the local HD dealer and I made arrangements to view it on Saturday. 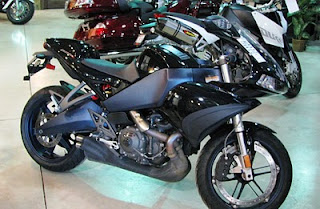 We haggled over price, but did not come to any kind of mutual deal. I explained to the salesman that I could not purchase a bike without having the opportunity to test it out. Also, the price they were asking for an 08 was a bit on the high side, I have seen 09's with less mileage for the same price.

Overall, the motorcycle show was okay but the weekend was great! For those of you who follow me on Twitter or read my blog, you know that I am a huge fan of my son's short track speed skating! 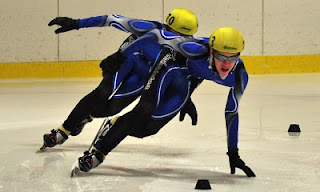 Well, he had an excellent weekend and accomplished his goal of qualifying for the Canadian Short Track Speed Skating Championships...he was just thrilled and rightfully so, he has worked and trained very hard!

Can't wait for motorcycle season to start in May! Until next time, ride safe!
Posted by Faceyman at Wednesday, February 17, 2010 3 comments: