I finally spent some much deserved time with the V-Star 1100 Classic. Last year, the rear shock began to leak oil and ultimately needed to be replaced. I have been procrastinating on replacing the shock, simply for the reason that my '09 Buell 1125R is just too much fun! In addition to that, the directions for rear shock replacement in the V-Star 1100 service manual look down right scary.

After a bit of research online, I decided to purchase a Progressive 465 rear shock from JC Motorcycle Accessories out of California. The price was great and delivery to Canada was a non-issue.

Progressive 465
Last weekend, I finally decided to replace the shock. I looked at the service manual again and just shook my head at the directions for the install. I decided that I would take a quick look online to see if there was any easier way to do the install. Sure enough, I found an alternate set of directions for the install that looked much easier than the Yamaha service manual...what did we do before the Internet!

The next step was off to the garage to complete the task. The images below give you an idea of the work that needed to be done. 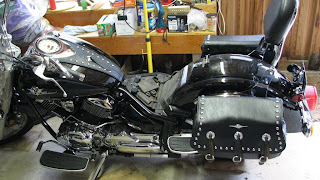 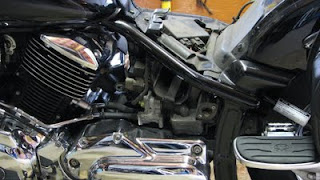 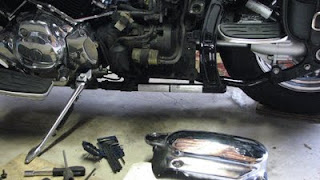 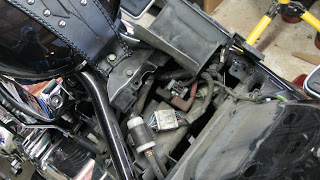 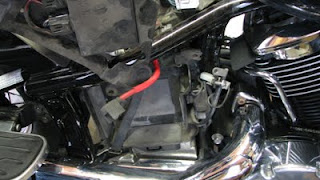 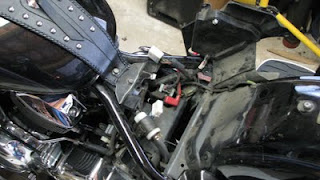 Disconnect wiring harness
Removing the tool box casing was a bit of the pain, there are many bolts and a few screws that hold it in place. Add the fuse box, the fuel filter, the fuel pump and affiliated hoses and I think you will get the picture...no pun intended! 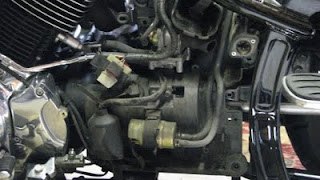 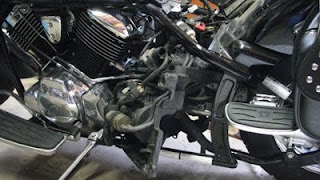 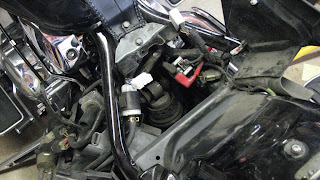 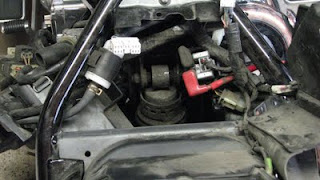 Alternate view of rear shock
Removing the shock was a bit tricky and lucky for me, my good friend Luc showed up as I was trying to figure out how I was going to get the shock out without an extra set of hands. Using a motorcycle jack on the front of the bike and a floor jack underneath the shock and relay arm (intermediate connector between rear shock & swingarm) made the job relatively easy. The floor jack allowed for taking pressure off the shock; top bolt removal and bottom connecting arm/bolt removal was easily done and the old shock was removed easily through the seat pan. The new Progressive shock was then installed using the same process. 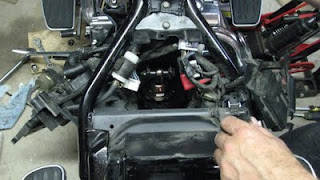 Next it was simply a matter of reversing the steps and putting pieces back in place. 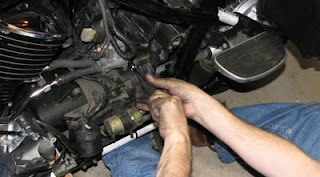 Re-installing tool box cover & other items
The total time was about about 3.5 hours for the shock install on the VStar 1100 Classic. 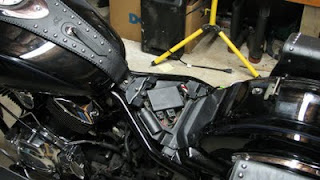 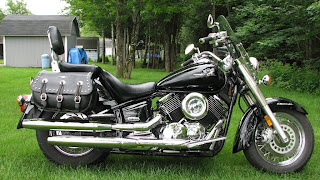 The finished product!
Now the VStar is ready to go and I have no excuses for not riding it!
Posted by Faceyman at Tuesday, June 28, 2011 1 comment:

Following my last post on the Fredericton Motorcycle Club Annual Toy Ride, I received an e-mail from a friend regarding the impact of such events. The story is very touching:

I saw your latest Blog post last night, and wanted to share a story with you concerning the Toy Ride. When our son was not yet three, he was having some very serious medical issues, things got complicated fast, and he ended up having an extensive surgery in Saint John, and then was transferred to the Fredericton Hospital for his recovery. Because he was young, suffered lots of trauma and pain, he basically refused to get out of the wheel chair. Almost a week had past, and the doctors and nurses needed him to try and start walking. I’ll never forget when the nurse came to our room and told our son that there were over a hundred motorbikes in the parking lot of the hospital and they had toys for the boys and girls. We wheeled our son down to meet everyone, and to make a long story short…I really don’t think the Riders really understand the impact they are making with these young children and their families. They put a smile on his face, and that day was the starting point to his recovery (and we still have his Mr. Potato Head toy that was given to him). I know our family will never forget the Toy Ride, and we will always appreciate the Riders who help out.

I suspect that this story would bring a tear to the eye of any biker as it did for me. So the next time you take part in a toy or charity ride, just remember that although you are there for the ride, you are supporting something much bigger than the ride itself. And for the general public, the story above demonstrates that bikers are good people too!
Posted by Faceyman at Monday, June 13, 2011 2 comments:

Today, I took part in the annual Fredericton Motorcycle Club Toy Ride. This is the third year that I have taken part in the ride and it is the only large group ride I participate in. Like the last two years, the event was well organized and the weather was perfect. This year the event was a bit different for me as I rode the Buell 1125R (so I looked a bit out of place)...the V-Star 1100 is temporarily out of service. 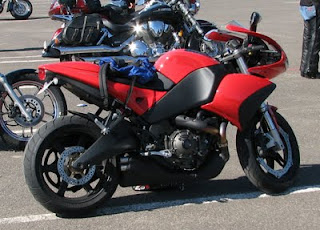 The ride supports the children's unit at our regional hospital and also supports the "Breakfast for Learning" program at Stanley High School...both excellent causes. I think I heard the organizers say that there were 166 bikes in the ride, so that is a pretty good turn out.

Like past years, I took some time to look at some of the rides and there were a few that caught my eye and peaked my interest. The custom work on this Harley-Davidson was very cool! Check out the custom wheels, the skull air intake cover, the brake lever and the gas tank. 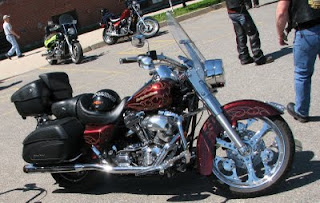 Click on the image for a full view
What can I say about this one...great looking bike! 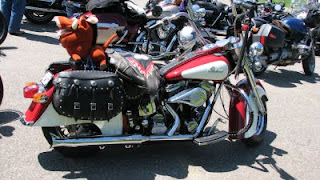 And...I have not seen one of these for ages, a Honda CBX 1100 Super Sport. I actually rode one of these many years back and it was scary! 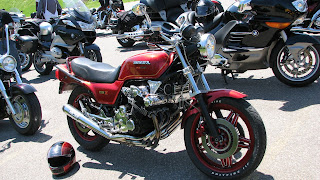 Here's a short clip I put together of the day!

Thanks to the Fredericton Motorcycle Club for another fine event! I look forward to the 2012 Toy Ride!
Posted by Faceyman at Saturday, June 11, 2011 2 comments:

The new Erik Buell Racing (EBR) web site has been released and it is worth checking out! At the site you will find complete information about the 1190Rs, including a pre-order information form and a parts store. The site looks great and the 1190RS looks even better.

The background music by Erik Buell and the Thunderbolts is pretty good too!
Posted by Faceyman at Saturday, June 04, 2011 No comments: