Here it is, my inaugural interview..."5 Questions & a Little More!"

I have been following @coolcycledude (also known as Bill Whitman) on Twitter for several years and I have to say that he is one of my favorite people to follow!  When I was thinking of who I would approach to be my first interview, Bill immediately came to mind! 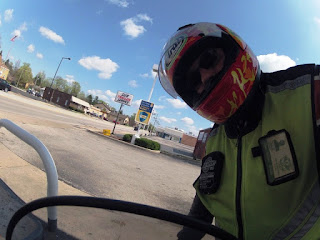 Bill resides in the Chicago area, he has a passion for motorcycling and has been involved in riding for over 40 years.  On top of that, Bill has a great sense of humor, his tweets and videos have made me laugh on many occasions!  Bill maintains a blog, CoolCycleDude.Com and a YouTube Channel - where he shares his motorcycle reviews, experiences and passion for motorcycling.

5 Questions & a Little More with CoolCycleDude!

Bill - Thank you very much for letting me be your very first interviewee. I don't know how wise of a choice that was, but I guess we will see how it works out for you. You may need to change the name of your blog after you splash this rhetoric all over it.

I guess I realized motorcycles were going to be my passion when I got on my first mini-bike. It had a Briggs & Stratton five horse power engine. No suspension, no front brake, no gearbox, just turn the throttle and off it went. It vibrated like it suffered from convulsions and stuff was always falling off of it. No Loctite in those days. Every once in a while I had to get the frame re-welded. Every summer I was on that thing from sun up to sun down driving around like a maniac. From that point on I just kept moving forward with faster and bigger motorcycles.

It's kind of funny how one experience can affect your whole life and keep you moving in a certain direction. My wife has suggested that my affinity for motorcycles is based on the fact that I have a risk taker personality. I personally don't see it that way because I'm always wearing my safety gear. But everybody sees something different.

The thing that I enjoy most about riding a motorcycle is it keeps me in the “Now.” I really enjoy going through the gears on a motorcycle. I enjoy watching the tachometer to make sure that I’m keeping the engine at its peak on power curve. I couldn't imagine riding a motorcycle with an automatic transmission. I might as well just be sitting in a car. I feel very connected to the motorcycle and everything around me when I'm riding one. It might be some type of Zen experience or my wife is right and I have a propensity for danger.

Faceyman - I think that anyone who has a passion for motorcycling can relate it to a "Zen" like experience. I enjoy your YouTube videos and your off the cuff reviews of motorcycles. Here's a sample of one of your reviews. What inspires you to post and share your videos, reviews, etc.?

The YouTube videos are basically the creative side of me coming out in the open. I'm really surprised that so many people have watched my videos and I'm in awe. I would like to thank all the people that have viewed my videos. But, I'm pretty sure most of them can't read. That was a joke! I have some big plans for the 2013 season of coolcycledude TV. I have ramped up my equipment and my knowledge of my video editing software to raise the bar a little. Don't get your hopes up, I said just a little.

I’m going to start podcasting in the near future if everything works out. That way I’ll have two ways to put people to sleep!

Faceyman - The beauty of YouTube and other social media is that we are free to share our views and there is always someone who will view what we create!  I also enjoy hearing about your current collection of motorcycles. What are your current rides?

Faceyman - That is quite the collection and diverse!  The comfort of a Goldwing and the raw horsepower of the VMax, I like it!  On any given day, how do you decide which bike you are going to ride?

This is probably going to sound odd but my favorite motorcycle out of the group is the Honda VTX 1800. I really like the essence of a V-twin engine. That engine generates a considerable amount of torque and horsepower so it's always fun to ride. It's kind of a shame that Honda discontinued manufacturing that model in 2008 because they couldn't gain a foothold in Harley-Davidson's market segment. For all practical purposes the engine in the Honda is a pretty good copy of what Harley has been doing all along. 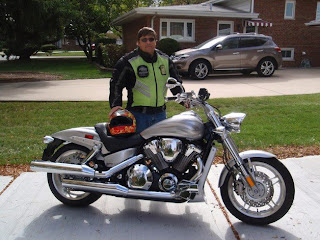 When I feel the need for speed and like to put my life at risk I ride the VMax. The VMax is a very powerful motorcycle. Also the VMax turns me into a different person whose brain is not functioning fully.  I’m going to quote Hunter S. Thompson and he said “faster, faster, until the thrill of speed overcomes the fear of death.” That pretty much describes my experience when I'm riding the VMax in a nutshell.

My Goldwing is the only motorcycle that I will ride more than three hours at a time. If I only owned one motorcycle it would be a Goldwing. I bought my first Goldwing in 1985 and have owned one ever since. I believe I've owned about seven different Goldwings in a little bit less than 30 years. The one I have now is a 2008 with an airbag and all of the other gizmos. Unfortunately I've only been able to put 5000 miles on it in approximately 5 years. I plan on keeping this motorcycle for at least 15 years. I've seen several Goldwings with over 125,000 miles on the odometer. Sometimes I think this might be an unfair comparison because the Goldwing doesn't have a motorcycle engine, basically it has a small car engine.

I thought after I retired from teaching I would spend a lot of time riding my Goldwing all over the planet. But for some reason I'm having a hard time leaving the workforce.

Over the years I've had people ask me why I own so many motorcycles. I used to say “I enjoy riding them” but I could see by the empty look on their faces that they didn't understand what I said and how it relates to me. So now I just tell them, ”they didn't let me have any motorcycles in prison.” They still have the same empty look on their faces but now they walk away.

Faceyman - I can relate, I ride my 1125R much different than I ride my VStar 1100 and am often asked, why two motorcycles?  Your latest purchase is a new Harley Davidson Softail Deluxe, what inspired you to add the HD to your current collection?

Bill - My new Harley-Davidson motorcycle is a bucket list item. I owned a Harley-Davidson Sportster back in the early 80s and it was a piece of crap. But it was a Harley-Davidson and I'm pretty sure I looked cool on it. It was used when I bought it and was manufactured during the AMF years. Stuff was always falling off of it, I don't know how many times I would put my foot down hoping to hit the foot peg and the foot peg had loosened and fell off. It was always leaking oil as though it was urinating everywhere I parked it. It was not a positive experience.

I've been going to several Harley-Davidson demo rides for the last four years riding all of the different models trying to make up my mind which one I would buy. I decided to purchase a 2012 Softail Deluxe with all of the extras. I consider a Harley-Davidson motorcycle a piece of history and not just a motorcycle. Let's face it Harley-Davidson has been gluing together motorcycles for 110 years...110 years! It is truly amazing if you compare it with any other product that's been manufactured on the planet.

I also realize that my new Harley-Davidson motorcycle is not very sophisticated! It's a simple fuel injected, air cooled V-Twin with only two valves per cylinder. Not too far away from my lawnmower. I bet that last statement is going to piss off a lot of Harley-Davidson enthusiasts. But on the other hand these vehicles are unique and all of the other manufacturers are trying to duplicate the success that Harley-Davidson has had manufacturing motorcycles in a specific market segment.

I especially like the nostalgic look of the model that I purchased.

Faceyman - Interesting, I have to admit that I like HD's as well, I am thinking a Street Glide may be in my future! Bill, once again, thank you for being my first interview here at Faceyman.Com.  Your passion for motorcycling is evident and I encourage people to visit your Blog, YouTube Channel and to follow you on Twitter.  Ride on my motorcycle brother and I look forward to the day that we can share some of the same road!
Posted by Faceyman at Sunday, January 20, 2013 No comments:

Email ThisBlogThis!Share to TwitterShare to FacebookShare to Pinterest
Labels: CoolCycleDude

I have been pondering the idea of adding something new to my blog, something that I have always wanted to try, an interview series. The idea came to me after reading several interviews published in motorcycle magazines and thinking, hey, I should add something like this to my blog!  So, very soon I am going to add some interviews to Faceyman.com.

Here's the plan...my interviews are going to be a bit different, they are going to be interviews with regular people who have a passion for motorcycling; people I follow on Twitter or connect with via other social media avenues.  The interview series, once started will be called "5 Questions & a Little More".  The idea will be to ask 5 questions, maybe 6 all with a focus on motorcycling.  I am pleased to announce that I have arranged my first interview; I am in the process of putting it together. I am not sure where this will go, but I am looking forward to it.