Wednesday, July 22nd - Day 2 of our journey to Îles de la Madeleine turned out to be much more of an adventure than we anticipated! We woke early, enjoyed coffee and loaded our bikes in preparation of our 50km trip to Souris, PEI to catch the ferry. We checked the weather forecast and it was rain, rain and more rain!

In yesterday's post, I mentioned that we had to travel 2.5km down a red dirt road (clay) to reach the cottage we were staying in...well, it rained extremely hard during the evening and that red dirt road turned into a cesspool of water and mud! It turned out to be one of the worst driving experiences that I have ever had...trying to get three loaded cruisers through 2.5km of wet clay, mud and water was horrendous! Click on the picture for a full view! 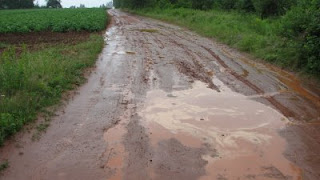 The rain had made the road very soft, muddy and slippery...talk about testing our driving skills, plus it was pouring rain as we were navigating this road! We were quite relieved that we made it through this mess without anyone putting their bike down...it was that bad!

We stopped at a local restaurant for breakfast and were advised by the locals to avoid the highway to Souris as there was major road construction going on. They advised us of an alternate route which we ended up taking. The ride to the ferry terminal was slow as it rained the entire time. We stopped for fuel in Souris and proceeded to the ferry terminal. Fortunately, we did not have a long wait prior to loading on the ferry. 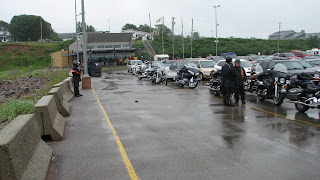 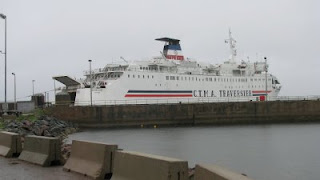 Once on the boat, we changed into some dry clothes, got some food and relaxed in the ship's lounge. 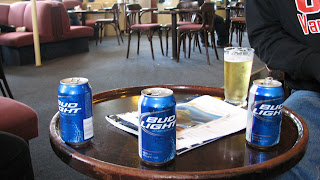 I ventured out into the rain to get pictures from the ships bow and stern. 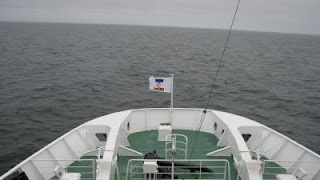 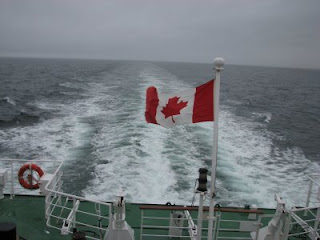 Five hours after the ferry left Souris, PEI, we arrived at the ferry terminal in the Village of Cap aux Meules. I did not have any time to get pictures as it was dark, raining and there was no time as the ferry unloaded very quickly! Fortunately, we had a short ride to the cottage we had rented. We unloaded at the cottage, went for food and settled in for the evening. 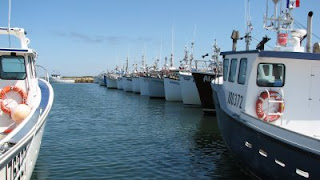 Stay tuned for some stunning scenery!
Posted by Faceyman at Monday, July 27, 2009