Tuesday, July 21st - The journey to Îles de la Madeleine started early Tuesday morning...the bike was packed and it was time to meet my traveling partners, Luc, Martin & Susan. With our bikes loaded, we set out for our first destination, Mount Stewart, Prince Edward Island...about a 400km journey.

The weather was perfect and we stopped several times for fuel and food along the way. There was not much to see as we stuck to the major highways. We stopped to take view of the Confederation Bridge, an engineering marvel that connects New Brunswick to Prince Edward Island. The bridge is 12.9km long and is the longest bridge that covers ice (in the winter) in the world. 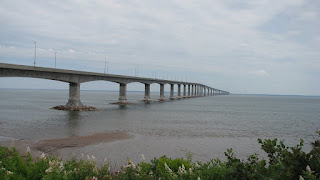 Next stop, was Mount Stewart, PEI. A friend had offered his cottage on the Atlantic Ocean and we graciously accepted his offer. 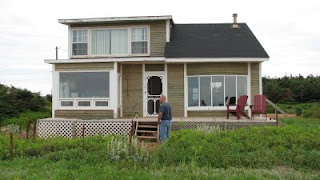 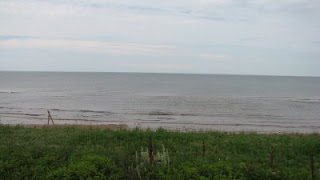 We had to drive about 2.5km through a farmer's potato field on a clay dirt road to reach the cottage. Potato farming is one of the largest industries on Prince Edward Island. 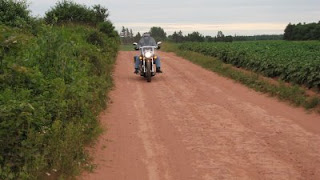 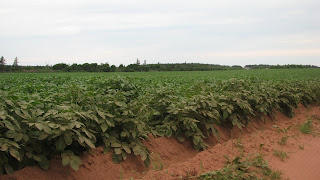 Once at the cottage, we unloaded our gear and checked out the area...nice beach with a great view! Supper was next and we relaxed through the evening in prep for Wednesday's five hour ferry ride. The cottage is about 50km from the ferry from Souris to Îles de la Madeleine, so Wednesday's journey would be an easy run. At least we thought it would be...that will be covered in the next blog post, so stay tuned!
Posted by Faceyman at Sunday, July 26, 2009