We were quite excited for day 2 and the start of our ride to the Gaspé Peninsula. We were up quite early, loaded bikes and prepped for our journey across the bridge to Quebec. 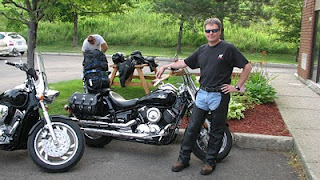 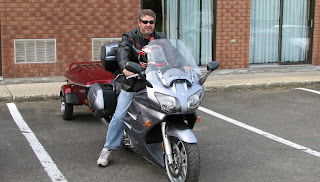 We stopped at the Pointe-à-la-Croix tourist bureau to pick up some literature regarding the Gaspé Coast. We asked about places to stay and things to see and went on our merry old way. We had planned on stopping at a mountain top monastery, but we missed the exit; we realized this when we were 80km past, so we opted not to go back. At that point we stopped for fuel and a quick bite to eat.

Our next stop was a short distance away in the community of Paspébiac. One of the first things that caught our attention were the custom painted fire hydrants. 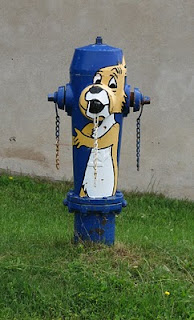 Originally, Paspébiac was a fishing community with codfish being the main source for the local economy. We toured a restored fishing museum called The LeBoutillier Warehouse, it was constructed between 1838 and 1855 and used for many years for drying codfish and preparing for shipping. 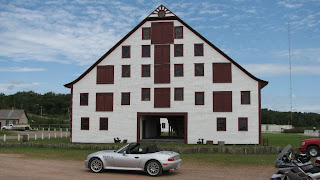 Below are the barrels that were used to ship dried codfish to different locations around the world. They are called "Hogsheads" and could hold up to 448 pounds of dried codfish. Apparently when they were full, they were easy to move by rolling along the ground. The buildings at this site were restored to an immaculate condition. 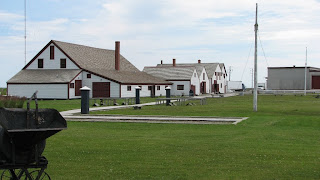 After a quick visit, we hit the road and continued on our journey. The view along the coast was breathtaking and we stopped to take a few pictures such as the ones shown below. 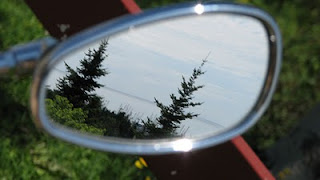 Our next stop was the community of Percé and this was a real treat! Percé is quite a tourist destination due to it's natural geography and the famous Percé Rock; it really is quite a site!

Bonaventure Island is another popular area in Percé; it is a national historic site and is a protected bird sanctuary. 293 different species of migratory birds have been recorded on the island and it also houses a community of Northern Gannets which exceeds 100,000.

The older homes in the community were also quite fascinating to take a look at! 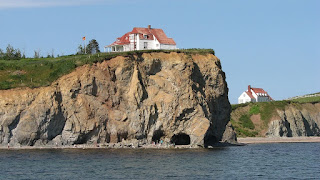 We had lunch in Percé and just enjoyed the afternoon. After lunch, we were not quite sure how much further we were going to ride. We decided that we would ride to the Town of Gaspé and determine our plan of action from there!

The ride between Percé and Gaspé was a blast! We rode through the hills and the twisties were so much fun! The road was a bit rough, but that was okay. Upon arrival in Gaspé we decided that we would stay there for the evening. Luc called a hotel, booked a room and we were off to check in. The room was perfect, it was huge, had three double beds and was located in the downtown core!

Once unpacked, we went for a walk around town and found a great cafe for a late evening dinner! Total riding distance for day 2 - 331km.