We awoke on day 3 to rain; we knew it was coming from the forecast the evening before. We decided to wait it out for a bit as the forecast for late morning/afternoon looked good. So, it was off to nice morning breakfast and a relaxed time packing our gear...it is so nice when you are not in a big hurray to hit the road.

After breakfast, the rain had slowed and we decided to load up and hit the road. 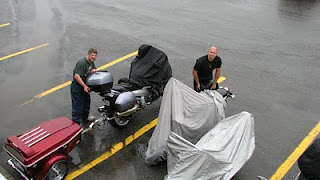 As soon as we hit highway 132, the skies opened up and the rain started to fall. We stopped for fuel and continued on in the rain; it was a mixture of heavy rain and light rain...it lasted for about 37km. The sky started to clear and I caught the glimpse of a lighthouse off in the distance. We stopped and I said to Luc & Zal, we need to go check out this lighthouse. We arrived at the lighthouse and to my embarrassment, it was only a small model! 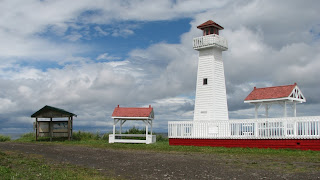 The weather began to turn again and the heavy rains started; this turned out to be a scary point in the ride for both Luc and I! One of the hills had fresh pavement and when the rain hit, it became very slippery. Both Luc and I felt the rear ends of our bikes start to slide as we started through the twisties...talk about your heart jumping up into your throat! The rain only lasted for 15km, then much to our liking, the skies cleared and we continued our ride through the hills.

Over the next hour or so, we traveled through several small communities. One thing that always strikes me as I travel through Francophone communities is the significance of the Roman Catholic Church. Virtually every community we traveled through on the Gaspé coast had huge Catholic churches, usually located near the center of the community. Beautiful in architecture, they were stunning to look at at. The church below in the community of Grande-Vallée is just one example of what you can expect to see if you make this trip.

After a quick stop for fuel, we continued on. We eventually found a real lighthouse in the community of Riviere Madeline; we had to stop for a pic so I could recover from my embarrassment of the last lighthouse stop. 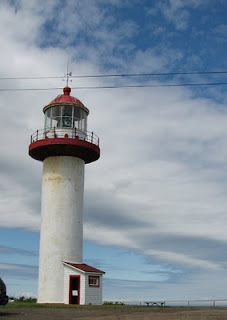 The next part of the journey may have been the best; at least for me. It was an 80+ kilometer ride along the coast. The sun was shining, the surf was high and the natural scenery was spectacular. I will let the images do the describing for me. 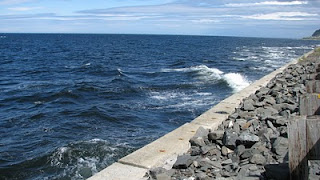 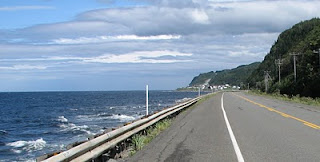 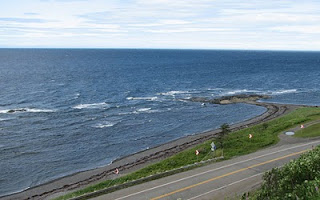 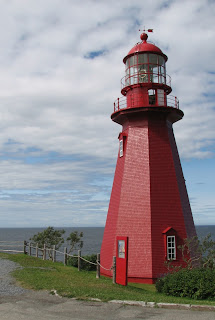 We stopped in Sainte-Anne-des-Monts for fuel and a bite to eat. At that point in time, we decided that we would ride to Rimouski and stay for the evening. Luc made a quick phone call, booked a room and we hit the road for our last 180km of the day.

We continued along the the coast on highway 132. As the sun started to set, the temperature changed and it became rather cool. We arrived in the City of Rimouski around 8:00pm, checked into our hotel and then stepped out for dinner. At dinner, we had a brief discussion as to where day 4's journey would take us. I asked Luc if he had every been to Quebec City; his response was no. I looked at Zal and he said, "Quebec City it is"! We returned to the hotel, made plans to get up early in the morning and ride to Quebec City.