Our ride this past week did not disappoint! We left Fredericton on Friday, July 23rd with a loose plan in mind, ride to the Acadian Peninsula of New Brunswick and then the Gaspé Coast of Quebec. We were gone 5 days and completed 2200+ kilometers.

Luc, Al and I met early Friday morning, first for breakfast and then to start our ride to the Acadian Peninsula. We were a little late getting away because Al got caught up in some traffic and then went to the wrong meeting location. Al lives about 140km from Luc and I.

The first 200km on Route 8 is a relatively boring ride, it goes through a few rural communities in Central New Brunswick and there is not a lot to see. We stopped for a quick coffee in Doaktown and then on to Miramichi City. The stop in Miramichi City was sentimental for me as I grew up in that community. We fueled up and then had lunch at an old Irish Pub called O'Donaghue's. Al is checking things over as we prepare to depart for the Acadian Peninsula.

The drive along the Miramichi River to the Acadian Coast was great! The weather was beautiful and we enjoyed the scenic route. Our first stop was in the de la ville de Tracadie-Sheila. It is a community that borders the Gulf of St. Lawrence and the Tracadie River. We stopped at the local marina to take in the scenery. (Those who read my blog know that I like to take pics of lighthouses, wharfs, boats & bridges) 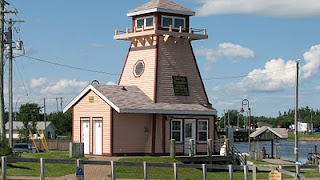 After a short visit in Tracadie-Shelia, we jumped on our bikes and headed for our next destination, Caraquet! Caraquet is the cultural capital for the Acadian region or "Capitale de l'Acadie" and is recognized for it's commitment to supporting the Acadian Arts & Culture! Like Tracadie-Sheila, it is a beautiful place to visit. And of course, we stopped at the wharf to take a few pictures of the fishing boats!

Next was a ride along the coast on NB Route 11. It too, is a very scenic drive as it borders the coast of the Bay of Chaleur. We stopped in the City of Bathurst for fuel and changed to Route 134 and continued along the coast to the City of Campbellton...it was a beautiful evening ride! Prior to checking into our hotel, we stopped to take a look at the bridge which connects Campbellton, NB to Pointe-à-la-Croix, QC. We were quite excited with anticipation for day 2 and our ride along the Gaspe Coast of Quebec!

We logged 500+ km, while Zal was closer to 640km for the day. We checked into the hotel and then went for pizza, what a great start to our trip!

Stay tuned for day 2 of the ride! Here is a teaser of what's to come!