Several months back I wrote a blog post about two of my Twitter friends, Jase & Kel and their goal to raise money for a "Land Speed Record" on a Turbo-charged Sportster! 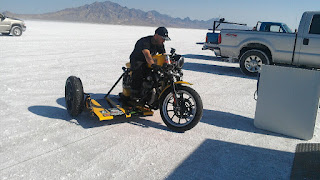 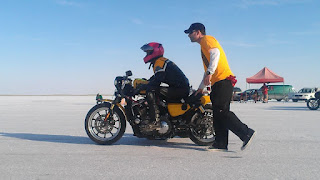 
With the support of many of their friends, they met their fundraising goal and are now at the Bonneville Salt Flats to attempt to set a Land Speed Record on a Turbo-charged Sportster with a sidecar...how cool is that!  Jase and his team at Hellcat Customs built the machine and it's time to set that record!  I can only imagine how excited that Jase and Kel are!  Heck, I am thousands of miles from Bonneville and I am excited for them...I can hardly wait for the online updates!

I am sure that Jase will have the same feeling as Burt Munro's character in the World's Fastest Indian when Burt says "You live more in five minutes on a bike like this going flat out than some people live in a lifetime."

So here's to Jase and Kel, go kick some ass and set a new Land Speed Record!
Posted by Faceyman at Friday, September 07, 2012