It's time for a rant and a well deserved one! I am a mild mannered person and usually don't get upset by too much, but lately I have been really bothered by distracted drivers in cars and trucks who have been using cell phones/handheld devices while driving. 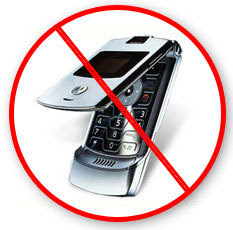 This past summer, our government made it illegal to talk on cell phones or text while driving (hands free cellular is permitted). Even with the introduction of this legislation and a minimum fine of $172.50, I still notice many cagers continue to use their cell phones while driving.

Yesterday, I went for a short ride on my Buell 1125R and there where two incidents that occurred that could have resulted in being involved in an accident. First, I was riding on a street that is two lanes and converges into one lane. I was riding the speed limit and about 50m from where the two lane ends and turns into one lane, a lady drives by me and then cuts right into my lane. She cut so aggressively that I had to hit the brakes hard to avoid a collision. Somehow, I noticed she was holding her handheld device in her right hand and not paying any attention to what was happening around her...what an idiot!

The second incident occurred a short time later when a lady lunged out of a driveway onto the street while talking on her cell phone. Her car took about half of the lane and I had to swerve to avoid yet another potential collision! If I had been in my truck, there would have surely been an accident as she had taken half of my lane and there was traffic in the oncoming lane! What are people thinking!

I fail to understand why it is so difficult for people to abide by this new legislation! What phone call or text message is so important that a driver wants to risk their life and more importantly risk my life because they want to talk on their phone or send/receive text messages while driving? I just don't get it, it's just stupid and totally avoidable!

Rather than be polite about it, to you cagers who continue to use your handheld devices while driving, "SMARTEN UP"! You have no right to put my life at risk!

Rant finished...to my fellow bikers, ride safe and watch out for idiots who use handheld devices while driving their cars!
Posted by Faceyman at Sunday, October 09, 2011