The Bike That Almost Was...

Our riding season is just about done, the weather has turned and we have already had some snow and lots of very cold fall rain. For those who follow me on Twitter and those that follow my blog, you know that I currently have 3 bikes in my collection; a 2002 Kawasaki Ninja 500 (fun toy), 2002 Yamaha V-Star 1100 Classic and a 1997 Kawasaki Ninja 250 (which my son 17 year old son rides). They can be seen to your right.

I have been actively searching for a new winter project but have yet to find one that really peaks my interest. I have been looking at sport bikes as I expect that my son will upgrade to the Ninja 500 in the spring and I will be left without a fun toy! Also, I am not really interested in cruisers as I have my V-Star and I really like it.

I have been really interested in Buell's and have been checking the web on a daily basis to see what I can find. The recent announcement by Harley Davidson to discontinue the Buell line of motorcycles came as a surprise to me and ever since, I have been more aggressively looking at Buells.

While searching the web on Friday evening I came across an advertisement for a New 2008 Buell 1125R, exactly like the one in the picture below. 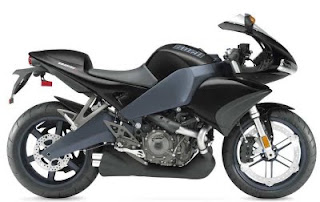 The bike was listed as being brand new and was for sale at a Harley Dealership about 200km from where I live. I could not believe the advertised price of $5999.00 and immediately I was interested! I conversed with several of my Twitter pals and there was consensus that that this was an unbelievable deal! I have to admit, I was excited and the plan was to call the dealer first thing Saturday morning to see if the price was right and to see if the bike was still available.

Saturday morning arrived and I called the Harley Davidson dealer and spoke at length with a salesman about the bike. On the road for $7631.00 he said...okay, I was still interested. At that point, he said that he expected the bike to sell within the hour as there had been many inquiries about the 1125R because of the advertised price. I explained that I was 2 hours away and would like to see the bike. The only way the salesman said that he could accommodate me and guarantee that the Buell would still be there was to take a deposit on the bike over the phone. I have to be honest, I have never seen a 1125R, let alone driven and I was not willing to put down a deposit.

After I hung up the phone, I debated if I would jump in my truck, make the two hour drive and take the chance that the Buell 1125R would still be at the dealership. For several reasons, I decided against it. First, I am looking for a winter project...this would not be a winter project and second, I think I was having a knee-jerk reaction about Harley Davidson's decision to discontinue Buell..even though the price on the brand new 2008 1125R was unbelievable.

There will be other opportunities and it was fun talking about the possibility of this bike with my Twitter pals. I am left wondering what if I purchased that bike! It was fun reading the online reviews and thinking about the bike that almost was...