Day 4 started with  breakfast at McDonalds in Oneonta, NY and a view of our maps.  The bikers we spoke to on the Lake Champlain Ferry recommended PA Route 6 and a visit to the Grand Canyon - Pennsylvania version.  We opted to take the I-88 past Binghamton, NY and head straight to the Pennsylvania state line.

The ride from Oneonta, NY to Sayer, PA was typical highway riding, nothing overly exciting.  Once we hit PA Route 6, the ride became much better!  Route 6 is very scenic and a fun road to ride.  Our first destination of the day was Wellsboro, PA.  Once in Wellsboro, we jumped on to Route 660 and headed for Leonard Harrison State Park and the Grand Canyon of Pennsylvania, or least we thought we were!  I was in the lead and completely missed the turn off for the State Park and we ended up back on Route 6.  Rather than backtrack, we opted to go into Wellsboro and have a coffee break.

During our coffee break, we had a conversation with a local gentlemen and he explained where we had missed the turn off to the State Park.  He also recommended several other places for us to visit. After our coffee we jumped on the bikes and this time rode directly to Leonard Harrison State Park. 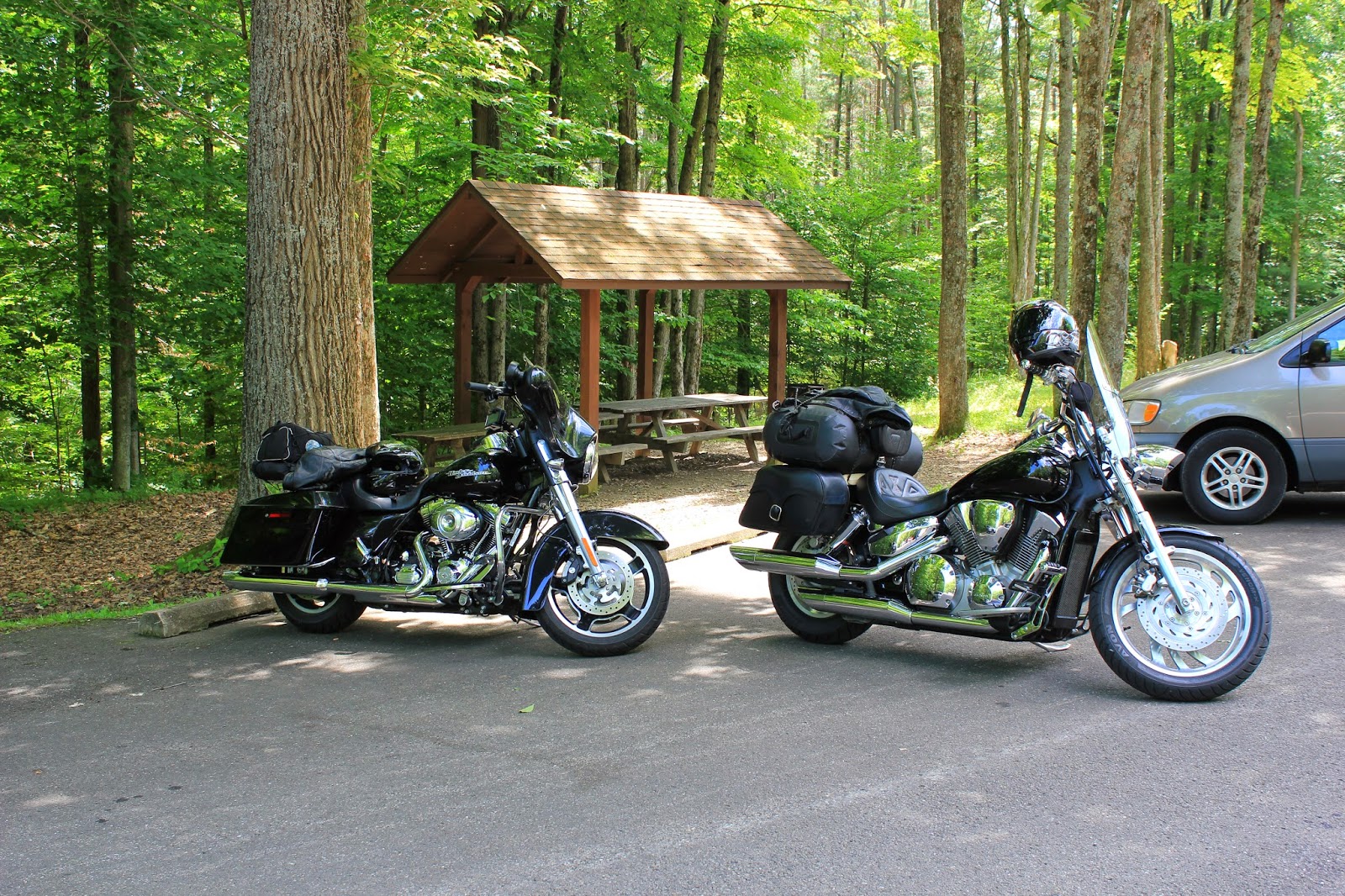 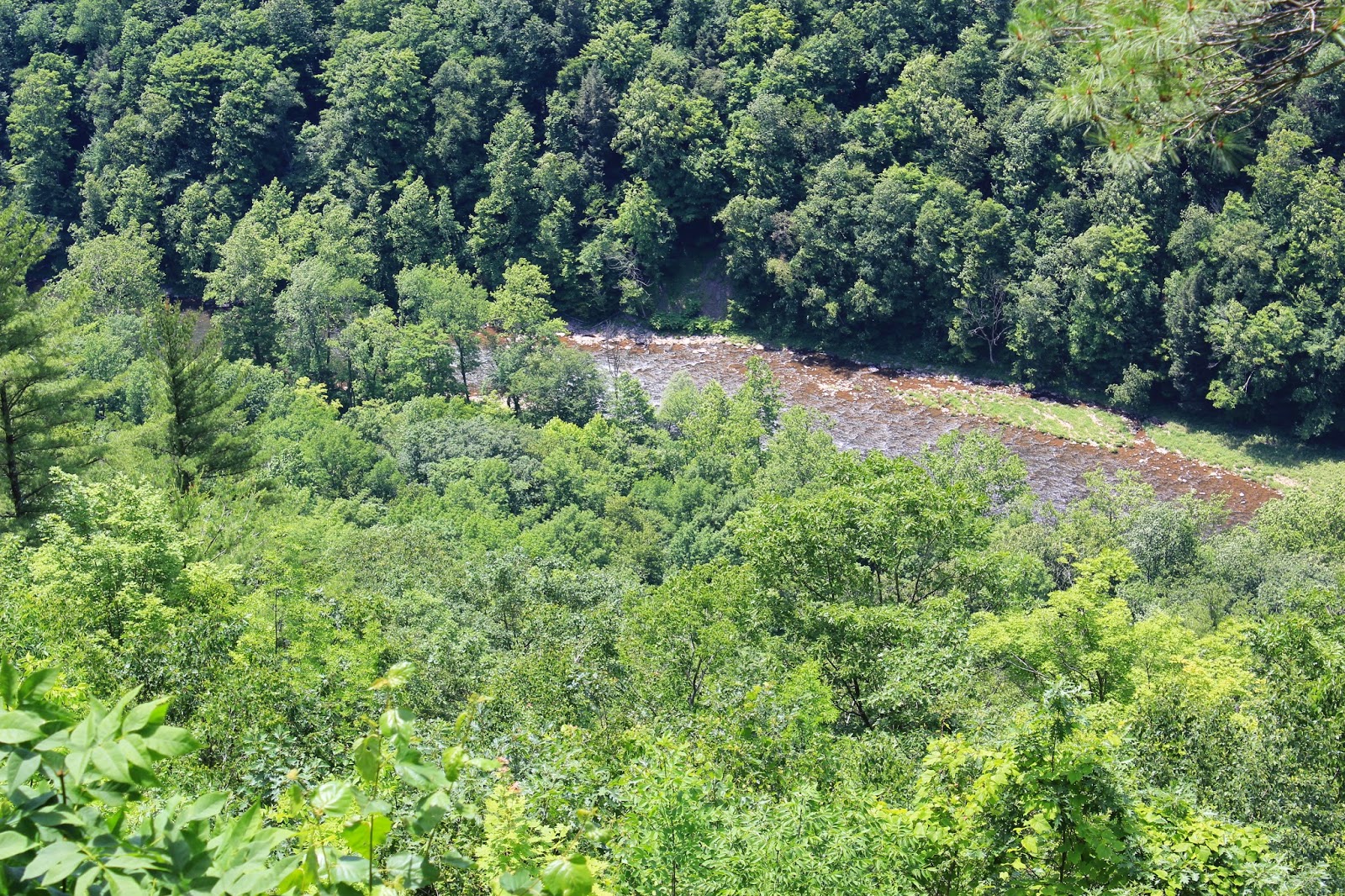 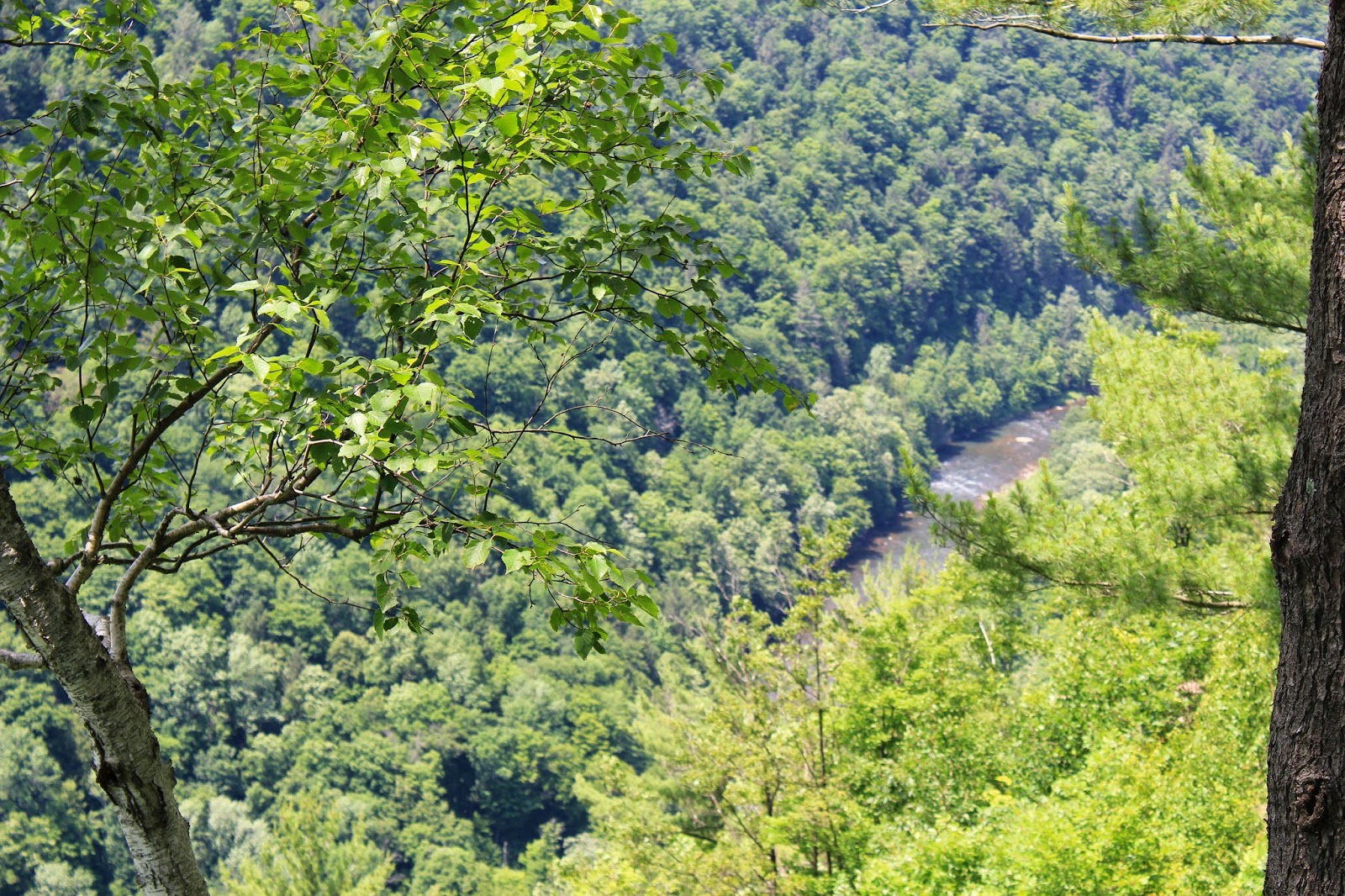 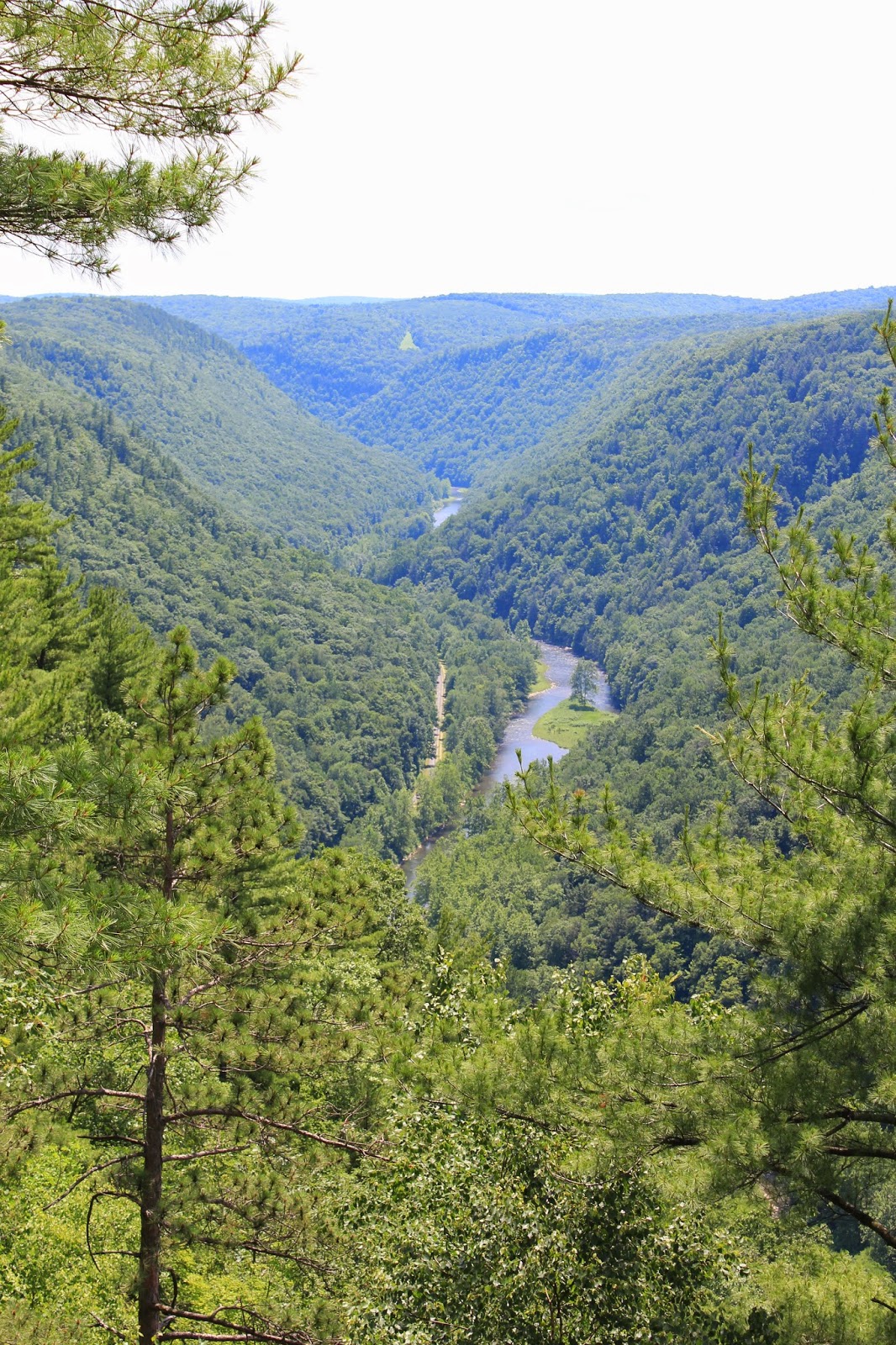 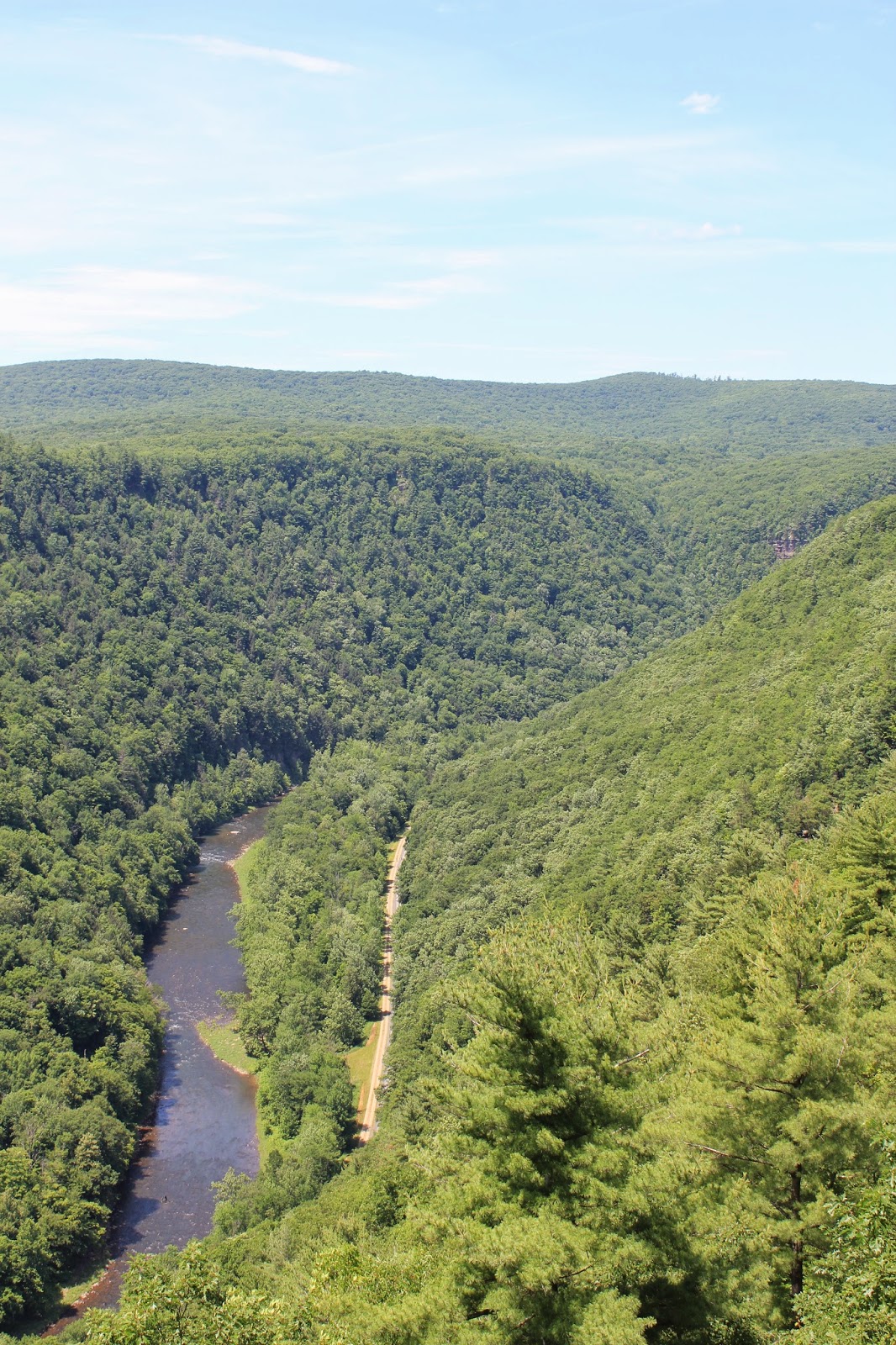 I enjoyed the visit to Leonard Harrison State Park and would recommend it as a stopping point if you are in the area.  The ride to the park is full of twists and turns and when you leave, make sure you take Route 362, it is a lot of fun!

After the ride on Route 362, you end up back on Route 6.  We continued West across the state, riding through many small towns and rural countryside. After a stop for fuel in Kane, PA, we continued on our way towards Warren, PA.  We had to stop along the way and put on our rain gear as showers were in the forecast and there were a few raindrops falling.

On our approach to Warren, I checked my GPS for accommodations and we opted for the Holiday Inn.  Upon check in, we were made to feel welcome and we settled in rather quickly.  After a short rest, we made our way to the bar and had a great evening.  The bartender, who we will call "Stella", welcomed us immediately and insisted that we join her and several other patrons with a seat at the bar.  We obliged and ended up having a great meal, drinks and an evening of conversation with our new found friends!

Day 5 started with rain in the forecast.  While loading our motorcycles, the skies opened up and it poured.  Since our motorcycles were parked under the canopy at the Holiday Inn, we opted for a later start.  While waiting, a young man came over to talk to us and told us about the local area.  He also spoke of his service in the US Military and his tours of duty in Iraq. It was a very interesting conversation to say the least.

Prior to the conversation with the young man, I had been on Twitter and posed a question to BK, one of my Twitter friends (she is originally from the Erie region of PA).  I asked her if she would recommend riding to Lake Erie and following Route 5 along the lake, she responded saying "yes! It's so beautiful this year along the lake. Too bad I'm not up there right now, I'd meet you".

The skies started to clear, so we jumped on our motorcycles and rode to Lake Erie via PA Routes 6, 8, 89 & 5.  We had our rain gear on as the roads were wet, but it did not rain on the ride to Lake Erie.  We were really surprised at the number of grapes being farmed in the area, made sense as we saw several vineyards along the route. Route 89 took us right to Lake Erie and we decided to take a break at Orchard Beach Park. 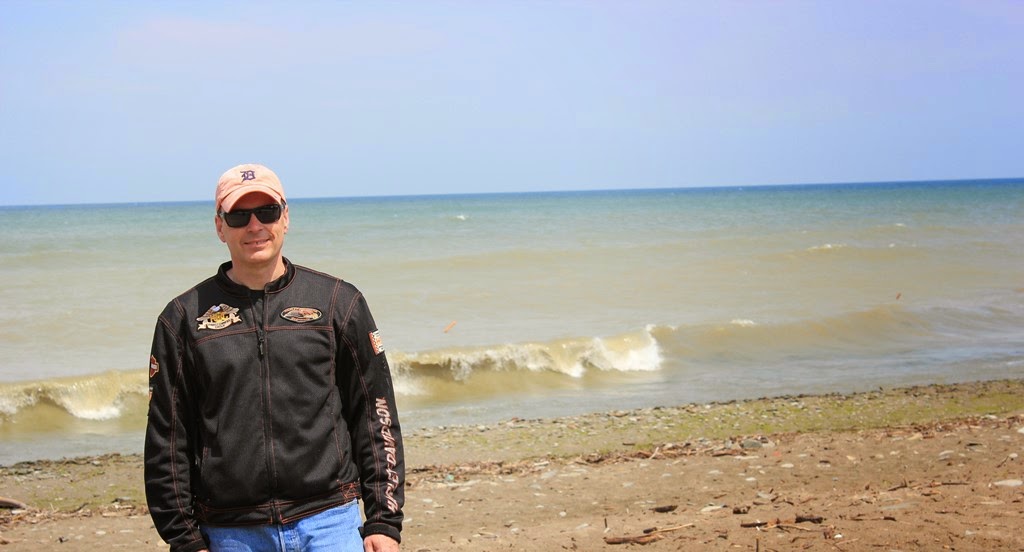 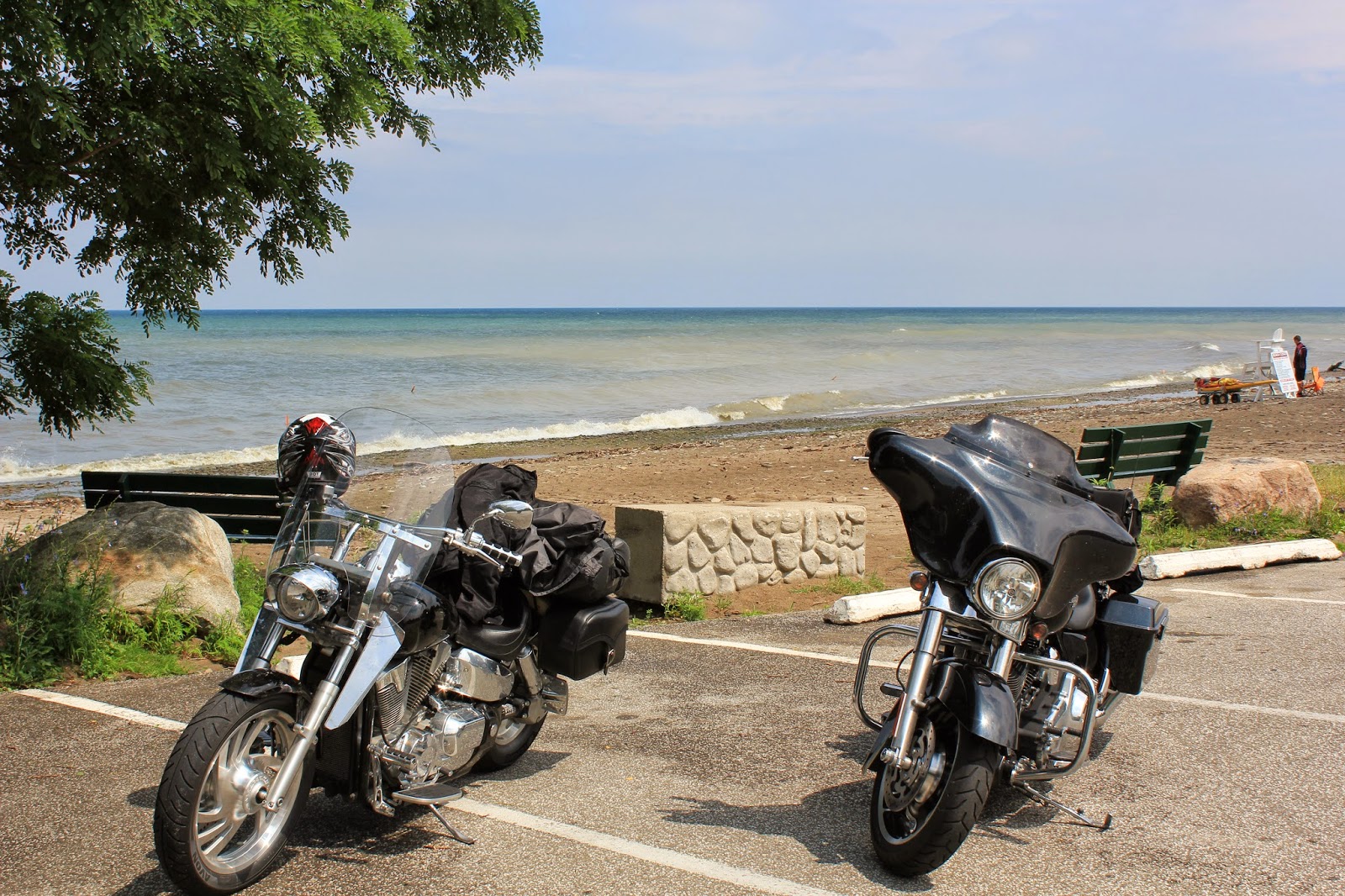 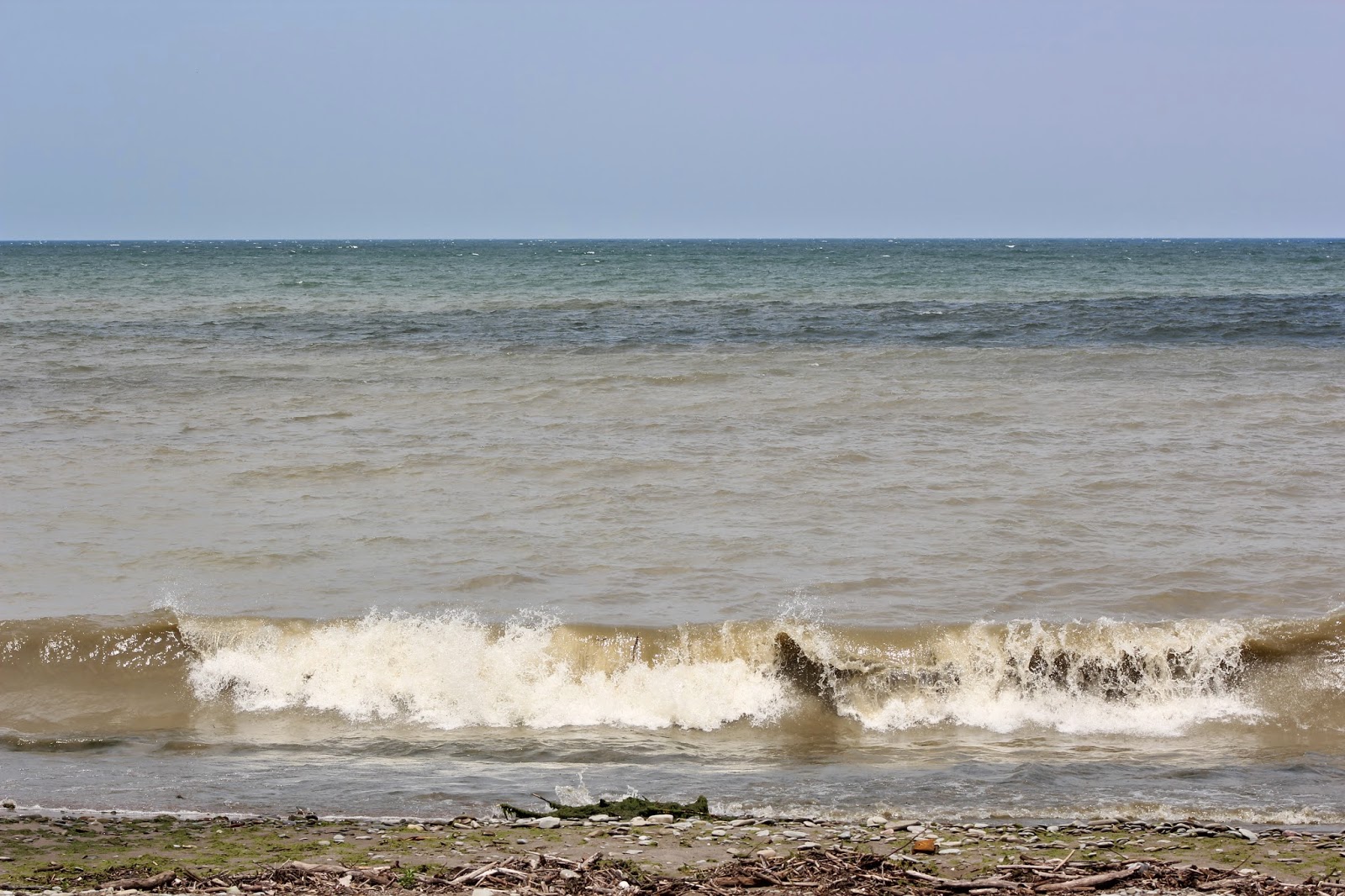 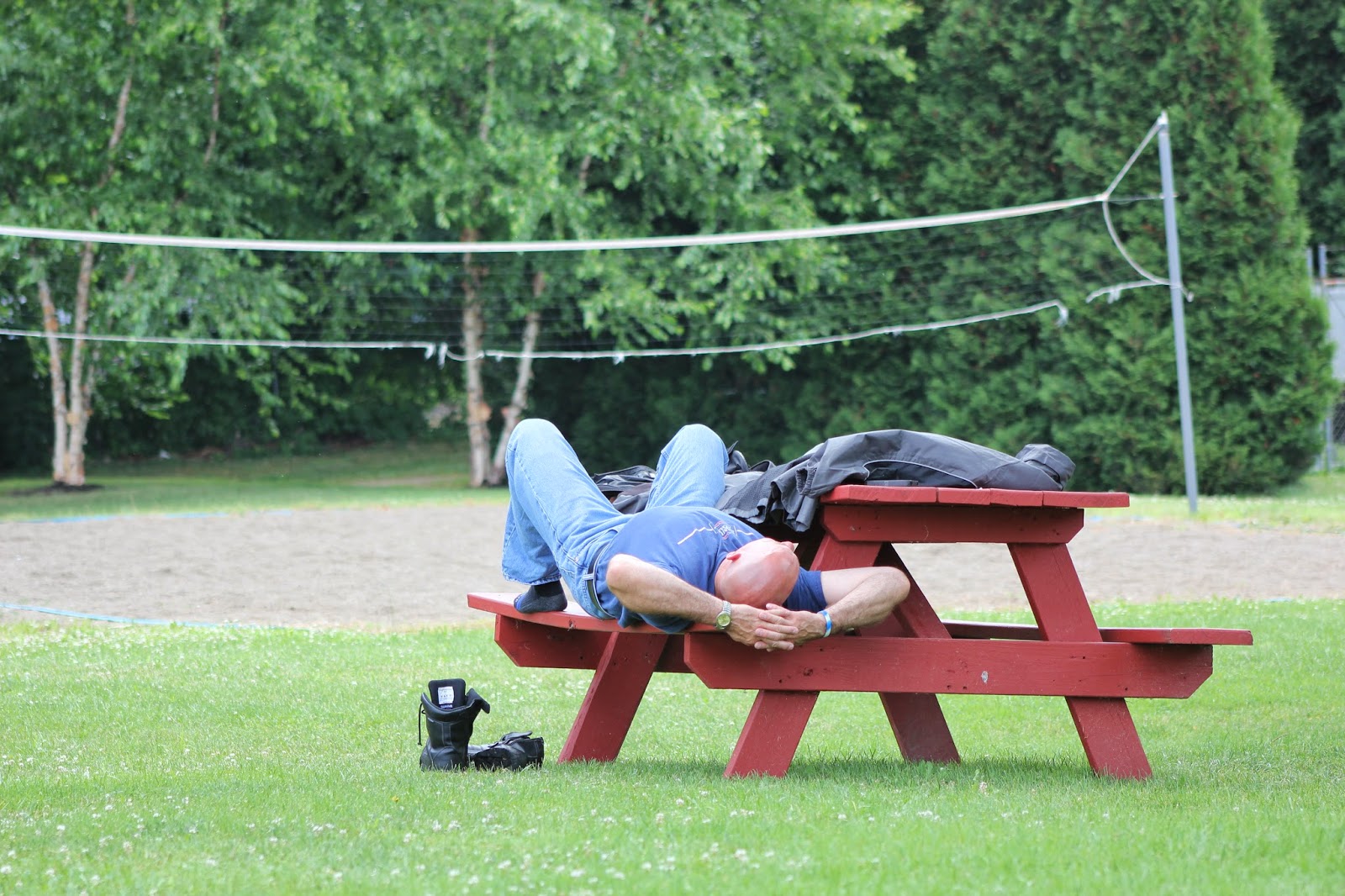 Luc taking advantage of the stop at Orchard Park Beach


After our break at Orchard Park Beach, we hit PA/NY Route 5 and rode along side of Lake Erie, thanks again for the recommendation BK, it is a great ride!  In Dunkirk, NY, the rain started so it was back to the rain gear for the next part of the journey.


We veered onto Route 20 which took us into Hamburg, NY.  Hamburg is on the outskirts of Buffalo and we noticed a significant increase in traffic. We stopped for a coffee at Tim Hortons and looked at the map again.  We decided that we would continue on Route 20 East as it was in our morning plan.
Once back on the road, we were pleasantly surprised to come across Ralph Wilson Stadium, home of the Buffalo Bills!  We just had to stop!  The stadium was under going renovations so it was not possible to get into the stadium. Security at the stadium allowed us to take a few pictures albeit from a distance. 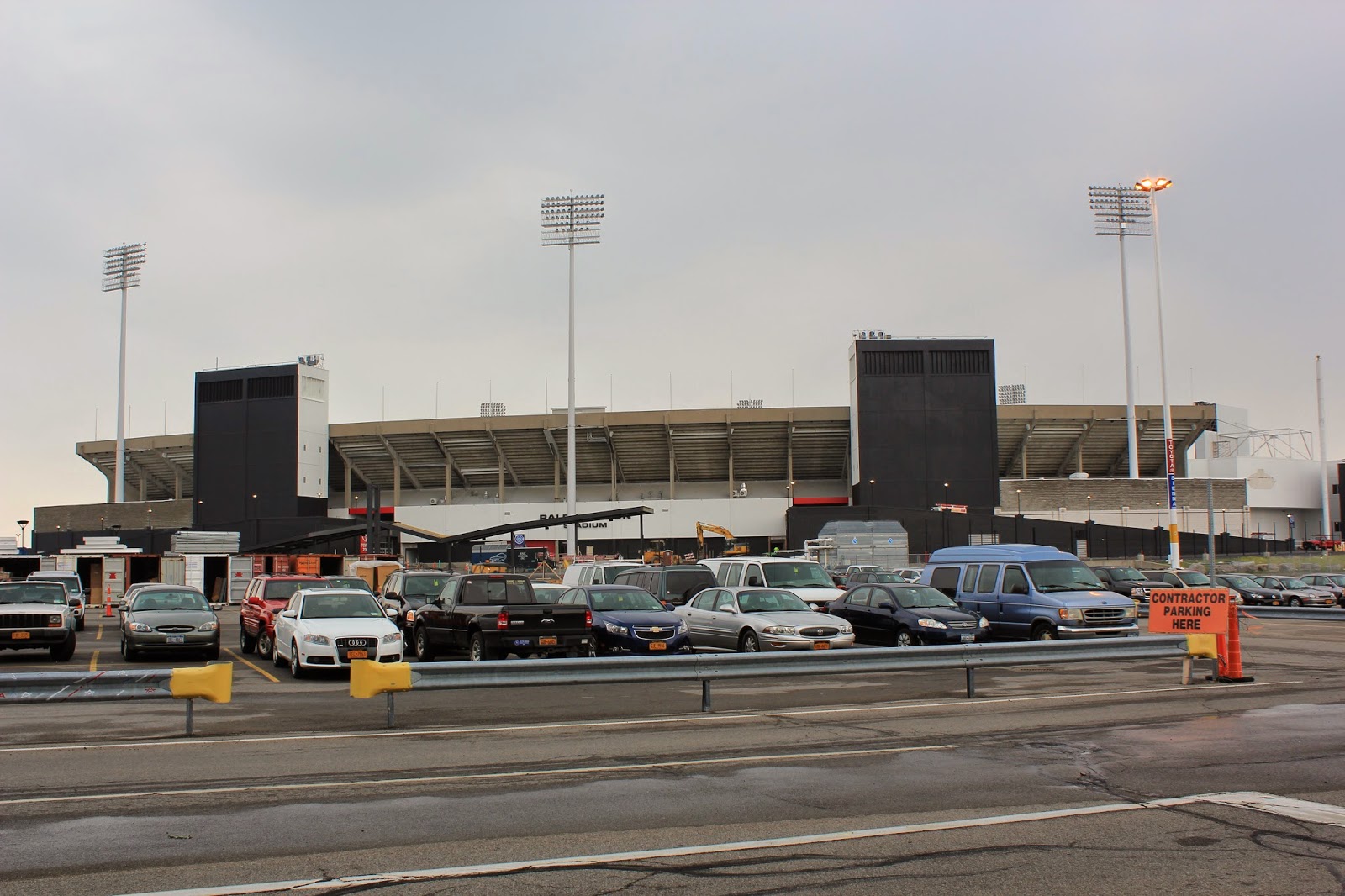 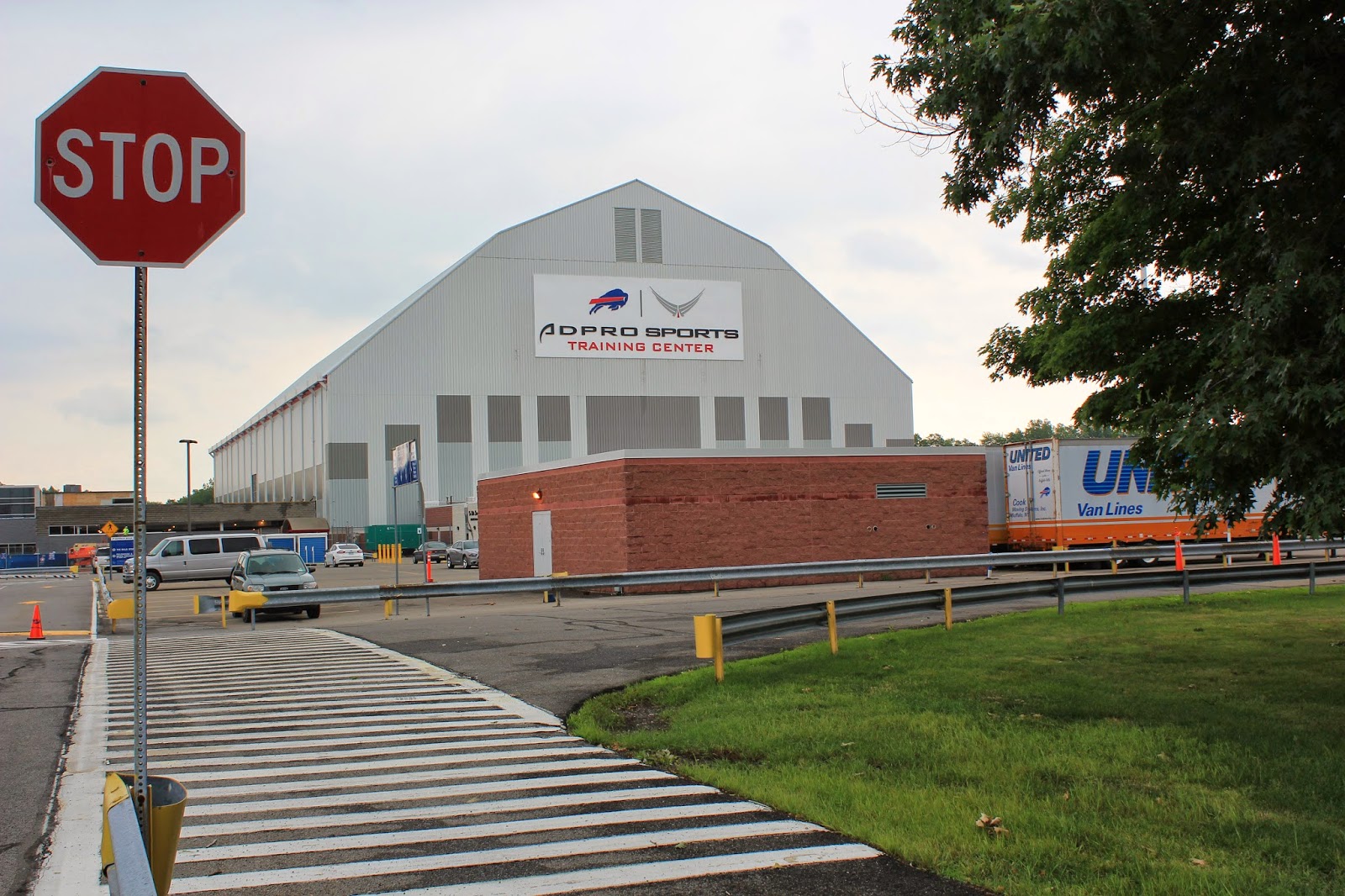 For the next hour or so, we rode in heavy rain, fortunately for us, there was very little traffic along NY Route 20 East.  The ride takes you through farm country where corn seems to be the major crop.  Also along this route are the Finger Lakes, this is a beautiful region of central NY State.  We saw many large homes/estates and it appears that waterfront property is for people who have lots of money, very beautiful homes!

We stopped in Geneva, NY for a quick break and decided that we would ride as far as Auburn and look for accommodations.  A Holiday Inn was showing on my GPS and the two previous nights at Holiday Inns were great, so we set the Holiday Inn in Auburn as our destination.  Upon arrival at the Holiday Inn, we were greeted and given a discounted rate on a room.  The hotel clerk was also biker, so we struck up a conversation and he gave us coupons for a couple of free drinks at the bar.  After unloading our motorcycles and getting cleaned up, we went for dinner and drinks at the hotel bar.  We were both tired from the ride and we settled in for an early evening.